Canada has a female sledge hockey program so strong that other countries take notes and use the Canadian model and expertise to build their own.

Despite the national team's prowess, women's sledge hockey doesn't get a lot of exposure or coverage, in part because it isn't part of the Paralympic Games – yet.

"We're on the path to having the introduction of women's para hockey at the Paralympic Games in 2030," said national team member Claire Buchanan.

When it happens, she'll be there. Buchanan is a para sport advocate, multi-sport athlete, single mother and broadcaster who has been instrumental in bringing awareness to para hockey. As an athlete ambassador, she speaks to groups of young women across Canada, including rural communities where para sports are harder to access.

Buchanan works to make sure other young women know they have a place to belong and excel.

"I love being part of the foundation of all this, where it's beginning. One of my favourite things is going out and reaching out and connecting with young women and showing them that sledge hockey is an option for them and they can reach that level of success athletically," said Buchanan.

Buchanan's athleticism and advocacy create the perfect platform for her next endeavour: a career in sports broadcasting. Already a co-host on The Neutral Zone podcast, she polled her friends and colleagues, who recommended Humber College's Radio Broadcasting program. So she enrolled, adding "student" to her long list of roles and responsibilities. 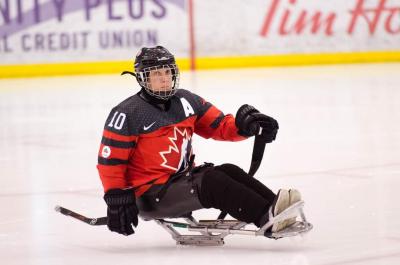 Buchanan was thrilled to discover that studying at Humber could help her development as an athlete, giving her access to consistent therapy at the Massage Therapy Student Program Clinic.

"As a disabled athlete, we would only really see our registered massage therapists (RMTs) and physiotherapists at training camp. During COVID, I haven't had access to any of those services," she said.

The season is ramping up for the first time in two years since the pandemic shut down most high-performance sports camps and events.

"I want to make sure I don't run into injuries and stay healthy as an athlete. The fact that the school I'm going to offers massage therapy and I can access it in between classes has been huge," said Buchanan.

Humber College's focus on work-integrated learning allows students to practice the skills they learn in class in a hands-on environment at facilities like the massage therapy clinic, The Tzu Chi Clinic of Traditional Chinese Medicine and the Humber Spa.

"My first session was with two students, and the professors must have been amazing. Both students asked a lot of questions and wanted to learn about the sport, how my body works and the differences between my sports and other athletes coming in," said Buchanan.

Buchanan has spina bifida and walks well using leg braces. She describes her disability as minor, but her experience is a valuable starting point for future RMTs. Buchanan's teammates have visited therapists who had no knowledge of or experience with disabled athletes.

"It might be studied, but it hasn't been experienced. So, this is a big part of the students' growth as well. Fifteen per cent of the world has a disability. We need to be thought of and included," said Buchanan.

"And that's what I hope to achieve." 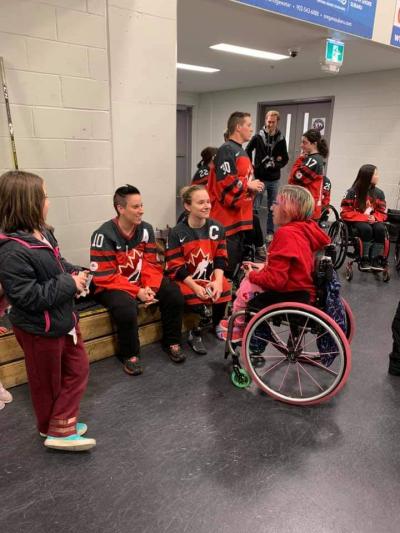 The sound of Buchanan's voice is clear, loud and powerful. She knows how to deliver a message, whether it's informing her healthcare providers or empowering other athletes.

"I've realized over the years being a disabled, queer, female hockey player, I get hit with quite a lot of barriers. Using my voice is a way to create change and move forward," she said.

Buchanan is an accomplished player and a superfan, so her gig on The Neutral Zone is a natural fit.

"It's just me and my buddies – four guys I've grown up playing sports with."

It's good practice for a future in broadcasting, perhaps from behind a desk for a major network.

"Every time I watch Hockey Night in Canada and see Cassie Campbell speak, I point to her and say, 'I'm coming for your job,'" said Buchanan.

She wants to change how para sports and adaptive sports are broadcast and seen, which is seldom.

"There's world championships for so many different sports that aren’t shown or talked about. We're training just as hard as any other high-performance athlete."

Buchanan has a few years to hone her skills before she’s ready to replace hockey superstar Campbell on Canada’s most iconic sportscast. She will graduate from Radio Broadcasting in 2023.

You can listen to The Neutral Zone at ami.ca/TheNeutralZone or on your podcast app.

Wellness Coaching: Come one, come all