On April 22, the Humber College Fashion Show returned in-person for the first time in two years. The show was hosted at the Barrett Centre for Technology Innovation at the North Campus, the first time it was held in the space. Despite a number of challenges including supply issues, the upcoming graduates of the Fashion Arts and Business diploma program remained determined and excited to showcase their hard work.

This year’s theme was 'Awakening', and it was “born out of the need to rise out of the tough, dark times of the past two years and move into an era of opportunity and explore the world that could be,” said Cayla O’Brien, the show’s project manager.

The theme was demonstrated through the work of Canadian designers. Sustainable initiatives were also implemented throughout the event. One of its newest features was having a QR code on a lavender bouquet each guest received, which gave them the opportunity to shop the runway. 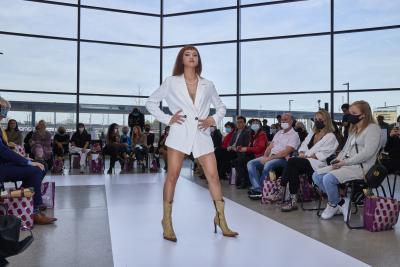 Guided by Jennifer Reitano, program coordinator and professor in Humber's Fashion Arts and Business diploma program, the students poured their energy into the live event after two years of hosting virtual only programs.

To complement the joyous theme, entertainment was provided by Canadian singer Dani Doucette. On the runway, striking handmade pieces by Clayson Fletcher – a Humber Fashion Arts and Business graduate – demonstrated the talent of the students at Humber College.

In support of the Ukrainian Red Cross, the students held a silent auction to raise money for Ukraine. The silent auction was supported by a variety of sponsors and raised $1,450.

The thoughtfully planned and curated design of the show was prevalent throughout the event. From the careful set design, entertainment choices and clothing, the entire show embodied “Awakening” and showcased the innovative ideas and skills the students have learned over the course of their program.

"Congratulations to the Fashion Event Production graduating class,” said Reitano. “It was a dream come true to produce an event in the stunning space of Barrett Centre for Technology Innovation, and it was so rewarding to be back working with students on campus again.”