Since November 2019, a nine-foot, 900-lb bronze sculpture depicting a Black male, deep in thought, wearing a hooded tracksuit at Humber College’s Lakeshore campus has been stopping people in their tracks. Cover Up (The Reveal), 2019, is a thought-provoking work by British artist Thomas J Price, whose art challenges historical erasures and contemporary absences of the Black male body by reframing ordinary men in the conventions of classical sculpture. His work examines anti-Black racism, state violence, power corruption and more. Before its deinstallation in August, the bronze man reaching for his hood stood in front of C Cottage and invited both self-reflection and interaction.

Justine Kohleal, former assistant curator at The Power Plant Contemporary Art Gallery, was there for the installation a year and a half ago and was struck by the excitement it generated. 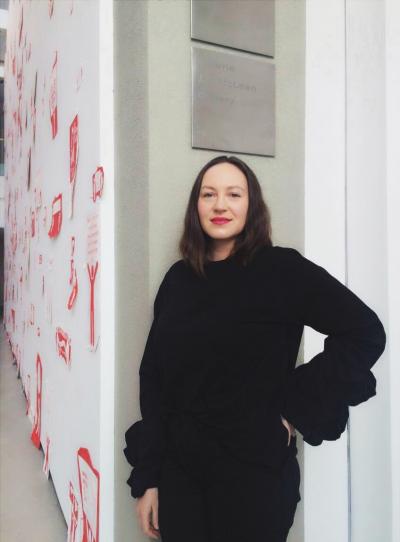 “The sculpture allows people who typically wouldn’t see themselves reflected in public monuments a chance to see themselves in this monumental scale in a way that’s positive. Watching that happen in real time, I thought, ‘Oh yeah, this is why I curate. This is important.’”

Kohleal worked under The Power Plant Contemporary Art Gallery’s director and artistic director Gaëtane Verna, who followed Price’s work and trajectory for years before being the first to show his sculptures in Canada.

Cover Up (The Reveal)—on loan from the Rennie Collection in Vancouver—was part of Ordinary Men, a larger exhibition curated by  Kohleal and presented at The Power Plant in the summer of 2020.

During his time in Toronto, Price visited Humber’s Lakeshore campus and had the opportunity to learn more about the campus’ history. He decided to install Cover Up (The Reveal) at a central spot outside C Cottage.

“As soon as it went in, and even while we were installing it, so many students stopped and chatted with us, chatted with each other, and the conversation started instantly,” said Casey Norris, project lead for Humber Galleries. 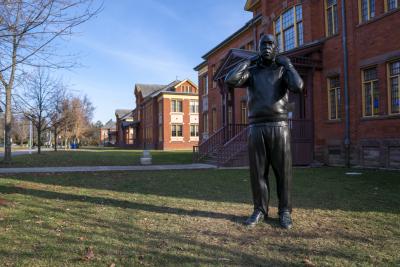 Cover Up (The Reveal) was part of Humber’s Campus as a Canvas initiative which launched in 2019 after Humber Galleries was integrated into the Faculty of Media & Creative Arts. Humber Galleries was reimagined to extend its offerings beyond campus buildings and allow everyone to interact with it in a way that is meaningful to them.

“We started taking spaces that were already built, but maybe not even used, then we refurbished them to make them bright and colourful. We’re to the point now that as things are being built at Humber, we’re actually becoming involved in the process and able to incorporate art from the ground up,” said Norris. 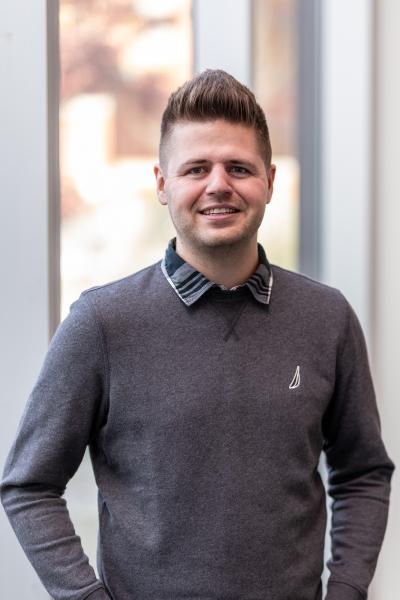 Humber Galleries and the faculty were consulted when Humber’s International Graduate School was built in downtown Toronto. They’re also adding its finishing touches, hanging artwork from past students from the gallery’s collection in the brand-new space.

Campus as a Canvas continues as Humber students, staff and faculty begin returning to its three locations in greater numbers. The college and the broader community can expect more public art installations coming throughout 2021.

Learning Skills Workshop: Should I Write This Down? Note Taking Skills

Forget the frame – Humber Lakeshore Campus is the canvas