Children are acquainted with the power of thread early on. They poke holes in tin cans, tie off the string connecting them and pass messages back and forth. For artist Tracey-Mae Chambers, the connection is literal and symbolic.

“We can actually connect through string, and I wanted to use that in my art to illustrate reconnection,” she said.

In her #HopeandHealingCanada project, Chambers uses red string to create sculptures inside and in nature. She wants to reconnect settler Canadians and Indigenous communities, where she perceives a “complete lack of connection,” highlighted by the discovery of children’s unmarked graves at residential school sites across Canada.

“I found it really offensive that people were shocked by finding kidnapped children’s graves at residential schools. I was really stunned by that. I assumed everyone knew. Where did you think these children were? It really came out of that,” she said.

Chambers’ message of hope and healing extends to the COVID-19 pandemic too. People are meant to get together and connect over meaningful conversation after being disconnected for so long.

The first was created outside the Student Welcome and Resource Centre, which has thus far withstood the elements. It will be taken apart later so as not to leave any waste behind. The second installation was assembled inside the L Space Gallery’s exterior facing window. It will remain on display until the end of the term.

Chambers has installed more than 40 pieces so far on campuses and in public spaces across the country.

“It’s challenging, but if I make a mistake, I can untie it. I love it. I’d like to do the installations 24 hours a day, eight days a week, especially if I’m outside creating something,” she said. 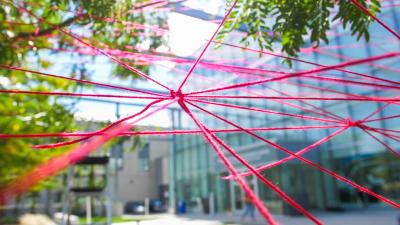 Chambers’ work is featured in private and public art collections across North America. She is a Metis artist who discovered her heritage later in life and is deeply committed to decolonization. The symbolism in her installations runs deep.

“The colour red, first and foremost, it’s a racial slur. But if you think about it, you see red when you’re angry. Red is always associated with passion and power. It ticked a lot of boxes,” said Chambers.

Even the timing of the installations can have meaning. For example, Humber Galleries asked Chambers to come to campus on September 28 and 29.

“We wanted there to be some sort of opportunity for reflection and placemaking on campus,” said Diane Pellicone, digital curatorial coordinator at Humber Galleries.

“We wanted to do something to commemorate September 30, the first National Day for Truth and Reconciliation.”

Chambers’ installations are making waves in the art community, and Pellicone heard about it through word of mouth. It was a perfect fit, and the visit was planned in partnership with Indigenous Education & Engagement  and the Lakeshore Grounds Interpretive Centre. 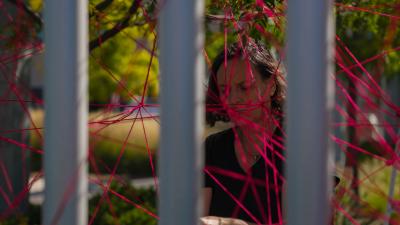 Chambers loves to visit campuses and learning institutions because of the interest and acceptance she finds there.

“It makes me feel more at ease, knowing they’re looking at the work with open eyes. Young people, no matter what program, they’re so much more open.”

“It’s the biggest part of all things. Whatever it looks like. I can be a cog in the wheel to move it forward,” said Chambers.

There were a lot of voices telling Chambers her dreams were unattainable, including her own parents. She didn’t listen then, and she doesn’t listen now.

“It has to start with one person,” she said.

Ismail Ali's impact: How the CCBI and Humber Global are changing the Humber student experience

Cover Up (The Reveal) leaves a lasting impression on Humber Lakeshore

Forget the frame – Humber Lakeshore Campus is the canvas