Currently a learning services assistant in the Faculty of Media & Creative Arts (FMCA), she earned a bachelor's degree in computing and information technology in her native Jamaica, where she fell in love with photography. Moodie is self-taught, but soon after she began creating images, in 2010, she started to win awards for her portraits and landscape photography.

A few years later, in 2014, she moved to Canada and enrolled in Humber’s Photography program - and discovered a niche she had never even considered.

“That’s when I became interested in photographing food,” she said. 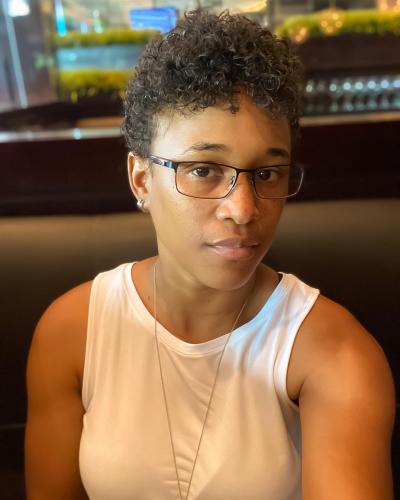 Moodie’s recent Cone Series has a permanent place on the wall of Lakeshore campus’ A Building. Another version is on display outside, in an unlikely place.

“The Humber Cultural Hub (HCH) building was going up, and they wanted to show something pretty along the fenced area.  They approached me to see if I would be willing to have my work printed there,” she said.

HCH is in the first phase of construction which includes a 250,200 sq. ft building featuring a recital hall, specialty teaching spaces and a student residence addition.

The space will be a community-building resource in the Lakeshore community offering accessible spaces for community arts organizations, entrepreneurs and creative industries.

Moodie’s Cone Series is a collection of photographs depicting ice cream cones of various bright colours, filled with colourful foods, like a blue cone full of and surrounded by blueberries and candy or a pink one filled with raspberries.

Though her art went up on the fence in 2020, due to COVID-19 restrictions, Moodie only saw the giant printed image this summer.

“I didn’t actually realize how large it was until I stood next to it and thought, ‘This is the same height as me!’” she said.

Moodie’s work is about to evolve. Students in FMCA are learning to work with augmented reality (AR) software and faculty members have found a way to leverage her work as a learning opportunity. 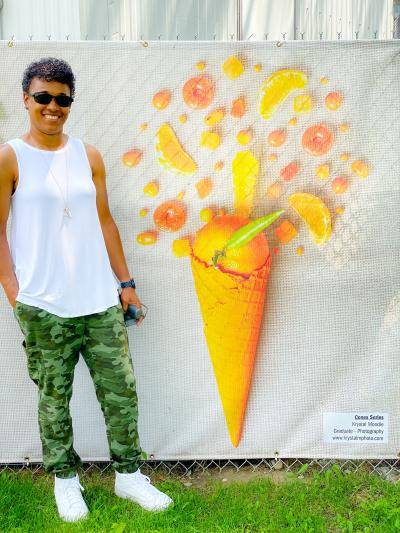 “I was blown away. When they contacted me, I was like ‘Really? My work? OK sure!’ It’s really cool,” she said.

Despite her success, Moodie still sometimes lacks confidence in her work.

“So, when people approach you about it, it makes you feel good. I’m very interested and very excited about the concept they’ve been working on with me.”

David Neumann, a professor in FMCA. says that when he saw Cone Series, he knew it was the perfect opportunity for students to practice their skills and become comfortable using AR technology.

“We have a work study student making 3D versions of the art, then students will take those assets and use them to create a different interpretation of Krystal’s art. Then, potentially, you could look through your phone at the site and see a new interpretation, like blueberries flying out of the cone or candy moving in different directions,” said Neumann.

“The key is the literacy part – where is this being used in industry and how can I creatively use this as well?”

Students will not only use AR-authoring software, but they will also be using UX and animation principles while exploring an emerging medium and building their portfolios.

The project is still in development and is set to be incorporated into the curriculum this fall.

Until then, Moodie’s artwork can be seen on the construction fence at HCH and on her website, krystalmphoto.com

Cover Up (The Reveal) leaves a lasting impression on Humber Lakeshore