Jessica Lynn, originally from New Zealand, was visiting Canada when she found an opportunity compelling enough to change her plans  of pursuing a mechanical engineering degree at home.

“I saw a Facebook ad for a college nearby and I said to my partner, ‘want to check out a Canadian college?’ I did it on a whim,” she said. 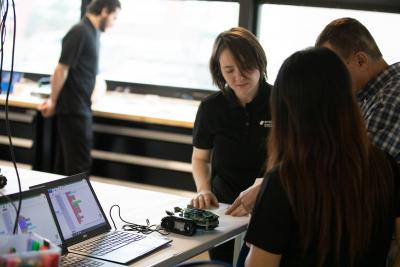 “I saw Humber and the diverse courses available within their programs and what labs and resources they had to offer. I was pretty swept away.”

Sixty students graduated from the Electromechanical Engineering Technology program in June 2020, and Lynn was one of two women who received their advanced diploma.

She soon found work in the manufacturing sector, where jobs have become increasingly scarce due to the COVID-19 pandemic.

In her role as Assembly Lead at JMP Solutions in London, Ontario, she is surrounded by university graduates.

Lynn’s hands-on skills and extensive extracurricular background were so impressive to her panel of interviewers that she was hired on the spot.

Building skills at the Barrett CTI

Humber’s focus on experiential learning is part of what first sold Lynn on the program.

She quickly learned from professors and industry experts that employers in the manufacturing industry recognized the value of the hands-on experience she would receive from the advanced diploma program at Humber.

In her first year of studies, Lynn heard about Humber’s Mechatronics Skills Varsity team, whose members train in the Barrett Centre for Technology Innovation labs and race against the clock to build automated factories and production systems.

She was immediately intrigued, but after inquiring, she realized that as an international student, she couldn’t compete in provincial and national competitions, but could still train and compete with the team.

“Humber’s Skills Varsity Team gave us a chance to compete alongside the Humber trainees. They trained us and we got exposed to the same process. It gave me the skills to train and mentor future competitors.”

Lynn would go on to mentor Skills Varsity students  for the rest of her time at Humber.

A good portion of Lynn’s learning took place within the walls of the Barrett CTI. 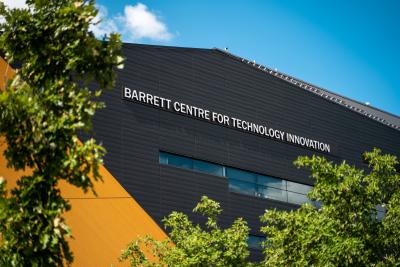 “Student success is what the Barrett CTI is all about. Its purpose is to provide an environment to integrate new learning pathways for students, faculty and industry experts to collaborate,” said Neal Mohammed, director of the Barrett CTI.

“It gives them an employability advantage that can help address the skills gap and help businesses stay competitive,” he added.

While at Humber, Lynn had the opportunity to program robots, Programmable Logic Controllers and even gained experience using the Barrett CTI’s Prototyping machine shop. The tools she uses in her current role aren’t new to her – she has already used them during her time at Humber.

Now, she’s able to recognize certain technical components when some of her colleagues cannot.

Lynn’s education and hands-on training were integral in helping her land her role with JMP Solutions.

The company, an industrial technology partner to Fortune 1000 manufacturers and producers, is fulfilling a contract to produce 10,000 ventilators for use in Canada’s fight against COVID-19.

Her experience with JMP is going better than she expected. She has already been exposed to several different roles and responsibilities within the manufacturing process.

“I interviewed for a Controls Specialist position, but I’ve been doing quality control, assembly leading and helping to manage production.”

Lynn hopes to be considered for a permanent position with JMP when her contract ends, or to receive a great reference for future positions elsewhere.

She has already received valuable work experience and the confidence to match the impressive skills she developed at Humber.

Barrett Family Foundation recognized for outstanding contributions to Humber and beyond