A witness had called police after observing two men dumping soil into a pit, thinking the incident was unusual and suspicious.

Upon arriving at the scene, police found what appeared to be a fresh grave and called in the forensic team to investigate.

That’s the scenario Humber College’s Forensic Identification program students operated under recently during a lab that had them recovering artificial human remains as part of the Crime Scene Management course. The program is the only one of its kind in Ontario.

Luckily, the weather held out for the most part and the students had a cool but dry day outdoors at the college’s Annex Building at the Lakeshore Campus as they began the process of recovering and preserving any evidence they unearthed.

Debbie Harris, a professor and program coordinator with the Forensic Identification program, broke the students into groups and each was assigned a role. Working in their groups, they began the process of securing the crime scene.

They divided the simulated gravesites into grids before they started digging up the earth looking for evidence and taking a systematic approach to the scenes. 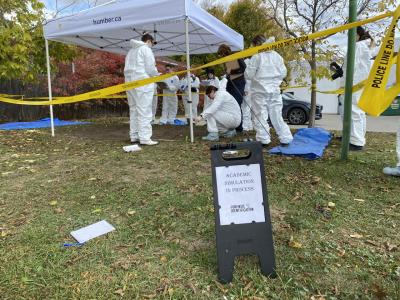 Student Ally Grassa said that getting to participate in the lab helped her gain a better understanding of what the day-to-day duties of a job in that field may be  and if she will enjoy doing it for a living. She liked the hands-on aspect of the lab, saying it helped her remember what was being taught in class.

Harris said the lab is training for what the students could experience when out on the job in the real world.

“This is a way to start preparing them for what they will see at a scene,” said Harris. “Labs like these provide the experience that will give the students more confidence when they do get into the field.”

The students were busy throughout the afternoon sifting through the dirt while looking for evidence, snapping photos of the scene and what they uncovered, while carefully preserving the bones, among various other activities. They worked methodically to ensure the artificial evidence they collected as part of the lab was uncontaminated and the chain of evidence was maintained.

When a little bit of fake bone or other evidence was found, they carefully brushed away the dirt covering it before taking photos and collecting it. 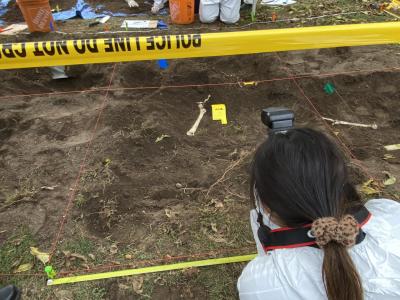 Nick Popov is enrolled in the program and said, as a self-professed hands-on learner, he was glad to take part in the lab. The experiential learning aspect of it helped Popov absorb what was being taught.

“It’s a great experience and I’m learning a lot,” said Popov. “It’s also fun to be able to go home and tell people ‘Hey, guess what we did in class today?’” 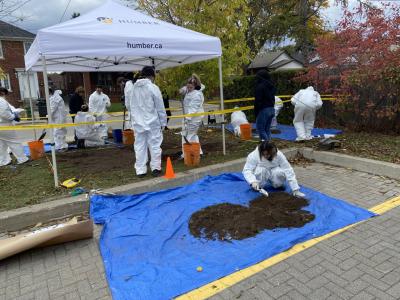 “All the instructors clearly know their stuff and they care about you and really want you to succeed,” said student Ryan Trenton. “Honestly, I love the program and I’m learning something new every single day.”

For more on the program, visit the Forensic Identification program website.