It’s a day that was created to commemorate the tragic legacy of residential schools and their lasting impact on Indigenous peoples and communities to this day.  All flags at Humber will be lowered that day to remember, reflect and commit to Truth and Reconciliation.

The residential schools separated Indigenous children from their families and communities and were designed to strip away their traditions, cultural practices and languages. There were 140 federally run residential schools in the country that operated between 1831 and 1998, according to the Government of Canada.

The schools were run by churches and rampant with physical, mental, emotional and sexual abuse.

Cara Loft, a professor of Indigenous Determinants of Health at Humber, feels that although the Pope made the journey to Canada this past summer and apologized on behalf of the Catholic church for the harms done to Indigenous children at residential schools, more tangible means of reconciliation need to be undertaken in order for true healing to occur within Indigenous communities.

“Apologies without actions are just nice words,” she said.

It’s estimated that more than 150,000 Indigenous children across Canada were forced to attend these schools. Many never returned home as an unknown number of children died while at the schools. Gravesites are still being discovered across the country.

Loft said more than 2,000 bodies of Indigenous children have been discovered so far and Indigenous peoples experience a recurring trauma each time more are found.

“The trauma that has happened to us as Indigenous peoples is still very relevant and it's still very present,” said Loft. “Having this day that honours the victims of the residential school system as well as the survivors is so important because we need to acknowledge the pain that they went through as well as the grief that we as Indigenous peoples are still experiencing today.”

Loft noted that decolonization requires the efforts of everyone, not just Indigenous peoples. More work needs to be done, she added, and allies are needed.

Loft said Humber has taken steps to decolonize the college and its classrooms with the hiring of more Indigenous faculty and staff. She frequently provides guest lectures and said that shows how non-Indigenous professors understand the importance of bringing Indigenous voices and content into their curriculum.

Decolonizing the curriculum and the college is an ongoing process, she said, but Loft feels progress is being made at Humber.

September 30 is also recognized as Orange Shirt Day, which encourages Canadians to honour the survivors of residential schools while reflecting on the loss of children and the acts of cultural genocide that attempted to break the spirit and legacies of Indigenous families and communities. Humber honours those touched by residential schools every Orange Shirt Day by hosting events and initiatives leading up to September 30 and wearing orange shirts with the slogan “Every Child Matters.”

Jason Seright, dean of Indigenous Education and Engagement (IE&E) at Humber College, said that Truth and Reconciliation is a year-round commitment, not simply a single day of action, and that in order to heal and build mino nawendiwin – or “good relationships” – all Canadians and the country’s institutions must engage in Truth and Reconciliation. 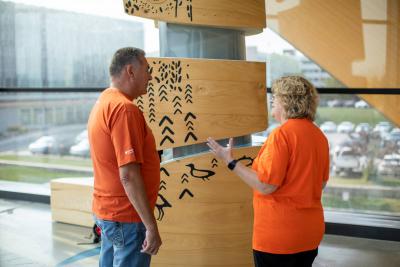 There’s a responsibility for Canadians to understand the impacts of residentials schools, the policies that created them and the roles that Indigenous peoples are playing in shaping our world today. The negative impacts on Indigenous cultures have been experienced for generations, and a multigenerational commitment from all Canadians is required to change this.

Humber President and CEO, Dr. Ann Marie Vaughan, said Humber is committed to recognizing and celebrating Indigenous cultures, histories, and knowledges in its academic programming, events, professional development, and other initiatives. It’s work that is guided by IE&E and Humber’s Indigenous Education Council.

“We call on every person within the Humber community to think about what Truth and Reconciliation means to you, and how you will enact it in your own lives,” said Vaughan.

How to be an ally

IE&E is encouraging the Humber community to support Indigenous staff and students on September 30 who may want to gather and participate in broader community events or do what they need to do to commemorate the multigenerational impacts of residential schools. They’re also encouraged to wear an orange shirt that day as well as posting on social media about what Truth and Reconciliation means to them.

One way to be an ally, said Loft, is to immerse yourself in Indigenous culture. Read a book such as Braiding Sweetgrass by Robin Wall Kimmerer or Islands of Decolonial Love by Leanne Betasamosake Simpson. There are movies such as Indian Horse, which is about a young Indigenous boy who survives Canada's residential school system to become a star hockey player, or the painful yet poignant We Were Children which shows the profound and terrible impact of the residential school system through the eyes of two survivors.

There are Indigenous television shows such as Reservation Dogs, musicians and singers such as Tanya Tagaq, Jeremy Dutcher or the Snotty Nose Rez Kids. Allies can also attend cultural days and pow wows or visit the Woodland Cultural Centre in Brantford, which is the former site of the Mohawk Institute Residential School, to educate themselves.

Visit the Indigenous Education & Engagement website for more ways to get involved.