A group of Humber College students have captured first place and the $10,000 grand prize that comes with it in an annual design competition that tasked entrants with creating a fully electric, autonomous concept vehicle designed for Canadians with a disability.

Atlas has a number of features to make it fully accessible for those living with disabilities. It can lower its height for better access, and it offers inclusive driving controls with a steering knob, accelerator ring and brake lever plus standard pedals.

The front seats fold away into rear storage to allow wheelchair users more room to access the driver’s seat to operate the vehicle. The team designed Atlas with a flat battery pack and motors by the wheels to increase space and allow storage in both the trunk and in the front of the vehicle.

Inclusivity through accessibility was a guiding principle as they designed it.

“The more accessible a vehicle is, the more usable it can be for a wide range of people,” said Liu. “We were trying to create something that can be used by nearly anybody.”

Liu said, when conducting research, they found that many existing vehicle options for those with disabilities are tailored for that specific user. With Atlas, they wanted to make it accessible to those with a variety of disabilities but also others.

“It could be a family vehicle where other members of the family can use it but if a person with a mobility impairment needs to use the vehicle themselves, they can,” said Liu.

Ken Cummings, a professor with Humber’s Bachelor of Industrial Design program, helped guide the team as they worked on the design.

"A major strength of the team's concept is its combination of an unusually sporty appearance with first-class accommodations,” said Cummings. “This changes what accessibility can be in future vehicles."

Lildhar said it was a great feeling to win and was proud that he and his Humber teammates captured first place.

“This is just more evidence to show what Humber's Industrial Design students are capable of,” said Lildhar.

“We did put in a lot of work throughout the past several months on this, but no matter how much you think ‘we did a really good job’ or ‘we can win this’ it doesn't really prepare you for the moment,” said Liu. “You read those words that say that you won and it's definitely very rewarding.”

Lildhar said the competition let them showcase the skills they learned at Humber, and gave them an opportunity to not only design the vehicle but execute it into a final computer-aided design (CAD) model. They even had, thanks to the company Autodesk, an Oculus virtual reality headset to use when creating their design. 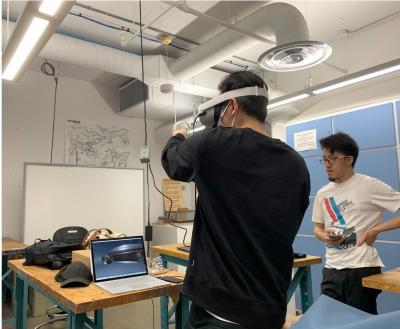 At this point, the design is strictly a concept as existing technology would not allow for Atlas to be taken from conceptualization to a fully working vehicle. However, there is hope that it could in the future.

“A number of the features that we researched and implemented are based on technologies that do exist to some extent. So, in the future when technology improves and manufacturing processes get more efficient, I think it definitely could be possible,” said Liu.