If there’s one part of her gold-medal winning performance in the Pâtisserie and Confectionery division at the Skills Canada National Competition that stands out to Emma Kilgannon, it would be her chocolate showpiece.

The theme for the competition, which was held May 25-27 in Vancouver, was the Roaring 20s. Kilgannon, who graduated from Humber College’s Baking and Pastry Arts Management program in April, wanted to create something that would wow the judges and decided on a show-stopping chocolate gramophone. 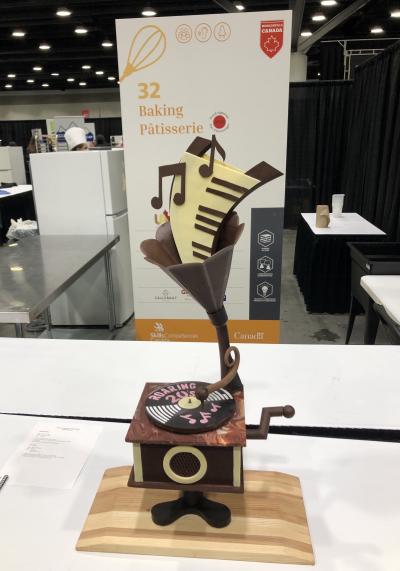 It wasn’t the only creation she made but was her most memorable one at the event, which she qualified for after finishing first in the Baking division at the 2022 Virtual Skills Ontario Competition. She had trained extensively with Sergio Shidomi, a former Humber instructor of hers who agreed to mentor her, and she credits Shidomi for preparing her for the competition including the creation of the showpiece.

“When they called my name, I was so excited,” said Kilgannon. “I honestly couldn’t believe it. I truly wasn’t expecting to finish first when I entered, although I was confident in my abilities and what I could create.”

“I owe a big thank you to Sergio for his work training me on chocolate skills plus all my other professors at Humber,” she continued. “If I hadn’t done the amount of training I did, I wouldn’t have been prepared to compete at that level.” 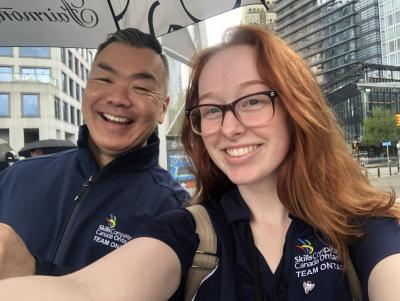 In addition to the showpiece, Kilgannon had to create a two-tier cake with a marzipan figurine, a pair of layer cakes with dacquoise, six plated desserts, six petit fours, 20 chocolate bon bons and 20 dairy-free chocolate bon bons. All in just three days.

“It was a tough challenge,” she said, adding that her time at Humber honed the skills she needed to succeed at the competition.

“All of the chefs who have taught Emma have praised her work ethic and talent,” said Baking & Pastry Arts Management program coordinator Susan Joseph. “Emma has demonstrated self-discipline and determination, and this has allowed her to excel in competition and win.”

Movtchan would stay most days after class to prepare and spent hour after hour practicing with his instructor Bill Hanlon to be ready for the competition. In the end, all that extra work made a difference.

“The competition was a phenomenal learning experience,” said Movtchan. “To me, silver means a lot. It shows that the hard work I put in paid off.” 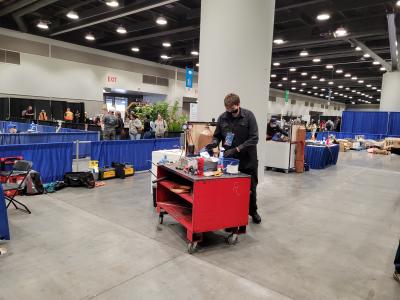 For the challenge, Movtchan had to prepare and submit piping and wiring diagrams, measure, cut, bend, flare and braze copper pipe, understand the components that made up the refrigeration system, wire the components, pressure test and also evacuate the piping, charge the system with refrigerant and test and troubleshoot as required.

Movtchan was appreciative of Hanlon and Humber for the individual and institutional support that allowed him to travel to Vancouver to compete. While there, he gained hands-on experience, further developed his knowledge base and the entire experience made him feel that much more confident about his decision to enter the skilled trades.

Hanlon lauded Movtchan’s determination as well as his desire to improve and get better. Hanlon noted how his student would study on his own before returning with questions that they would discuss and incorporate into their practice sessions.

“One thing that Andrian did right away was recognize where he needed practice. He would continue to practice over and over until he was confident that he had achieved the skill or understood the concept,” added Hanlon. “I'm very proud of Andrian, and the results both provincially (at Skills Ontario where he finished first in the Refrigeration division) and nationally are impressive.”