Humber College’s men’s and women’s basketball, volleyball and badminton teams have been dominant on the courts this season winning provincial and national titles. “Not only were our men’s and women’s basketball and volleyball teams competing for a provincial championship on the same night – they all won their titles within an hour of each other,” said Ray Chateau, athletic director at Humber College.

“In addition to the success of our badminton team at the National Championships, it has been a historic week for Humber varsity,” said Chateau. “The perseverance our student-athletes displayed to overcome the challenges from the last two years is nothing short of incredible. I could not be prouder of these players, coaches, and staff.” 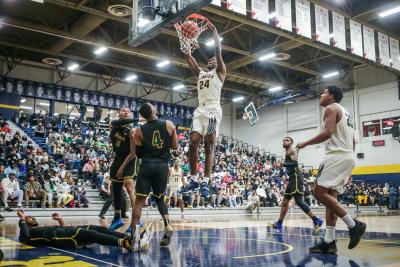 After three consecutive provincial silver medals, the Humber Hawks men’s basketball team could finally hoist the provincial championship banner after defeating the 15th seeded St. Clair Saints 87-70 on March 17. The Humber men captured the program's 15th gold medal and the first since winning at home in 2016.

The Hawks opened the game with a seven-point lead after 20 minutes, feeding off the home crowd’s energy at the North Campus Gym. As the minutes wound down, Humber was able to hold off any late game attempts at a comeback by St. Clair, capturing head coach Omar Miles’ first championship with Humber in his rookie season at the helm.

Kevin Otoo was named the championship MVP, while DeQuon Cascart and Frank Mitchell were named to the all-tournament team. The team will now get ready for the 2022 CCAA national championship tournament at their home gym at Humber’s North Campus from March 25 to 27. 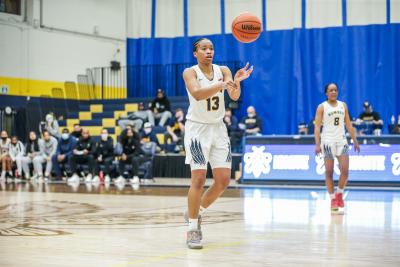 A dominant season from Humber’s women’s basketball team resulted in the team claiming their 11th OCAA title in program history on March 17 over the St. Clair Saints by a score of 103-91. Humber came out red hot in the first quarter, as the Saints had no answer for the duo of senior Nikki Ylagen and Miea Campbell-Johnson. Both finished with 10 points in the quarter as the Hawks held an 18-point lead after one.

Ylagan came up huge for the Hawks, dropping 34 points – including eight-of-15 (53.3 per cent) from 3-point range. MCJ recorded her tenth double-double of the season on 23 points and 12 rebounds. Sarah Baptie picked up her second double-double for Humber on 12 points and 11 rebounds while Kia Watt finished with 20 points and nine assists in the game.

The Saints rallied late in the game, but the Hawks were able to hold off their surge to claim the provincial title. OCAA Player of the Year Miea Campbell-Johnson was named the championship MVP, while Kia Watt and Nikki Ylagan were named to the all-tournament team. The team now heads to British Columbia for the 2022 CCAA National Championship, hosted by VIU. The quarter-final round begins on March 25. 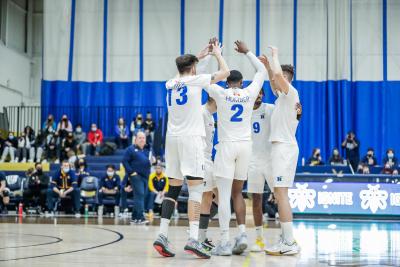 The top-ranked Humber men’s volleyball team successfully completed the repeat, winning back-to-back OCAA titles after sweeping the Redeemer Royals on March 17, 3-0. It was the first time the Hawks captured consecutive titles since winning three straight from 2010 to 2012.

Rrezart Sadiku and Joshua Fadare dominated for Humber in the Championship match, combining to score 33 of the Hawks' 57 points on the night. Sadiku finished with a game-high 18 points on 11 kills and seven aces while Fadare put up 15 points on 11 kills, three blocks and one ace.

Senior Rrezart Sadiku was named the championship MVP and tournament all-star, while All-Canadian Jake Gomes was named to the all-tournament team for the third time. The team now heads to Quebec as the top-seed in the 2022 CCAA National Championship, hosted by Cégep Limoilou. The quarter-final round begins on March 25. 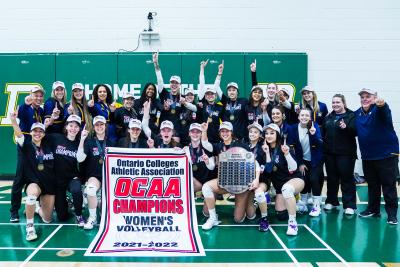 It was a record night for Humber women’s volleyball as they captured their historic 16th provincial title beating the sixth place Mohawk Mountaineers on March 17, 3-0.

All-Canadian Keyome Ellis was named the championship MVP, while Alex Bartmann and Aleks Steins were named to the all-tournament team. Up next for the women’s team, they are off to Prince Edward Island for the 2022 CCAA National Championship, hosted by Holland College. The quarter-final round begins on March 25. 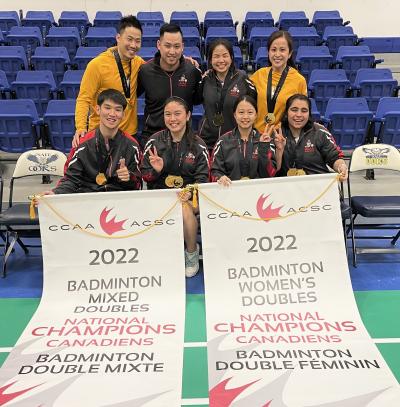 There was a gold rush in Edmonton as Humber’s badminton team continued its strong nationals run, capturing a national title for the seventh consecutive season. The squad won double gold at badminton nationals on March 19, as the mixed doubles and women's doubles teams each captured national titles.

The rookie duo of Airi Moromisato and Sirapob Kongubon dominated on the national stage, finishing the tournament undefeated. Meanwhile, the women's doubles duo of Victoria Duong and Praanjal Taneja finished round robin played undefeated, as well, only dropping one set along the way.

The national tournament saw Humber capture its fifth consecutive national title in the women's doubles discipline and sixth since 2013. It was Duong’s second career national title after winning the doubles in 2019. Badminton is one of Humber’s most dominant programs and has now claimed 15 CCAA national titles, which is one shy of Humber men's golf record of 16.