In August 2021, second year Electromechanical Engineering Technology student Daneep Lahl was enjoying his full course load, but the online delivery meant he had a lot of time on his hands and little to do once he finished the work.

Before partial campus closures in March, Lahl had been competing on a robotics team with a friend and

qualified for an international championship, which was cancelled around the same time.

For months, he was bored – until he was inspired to challenge himself.

“It was also when I got my first job, so I had the money to buy a 3D printer,” he said.

His goal was to build a remote-control robot from the wheels up.

Lahl spent months making his own wheels, motor and gearbox. Then he assembled the parts – and disassembled them.  The gearbox gave him trouble, so much so that during one trial, one of his prototypes melted and started smoking.

“3D printing is not the best idea for make a small gear box. I designed a model to hold those motors in place and then to hold my electronics,” he said. 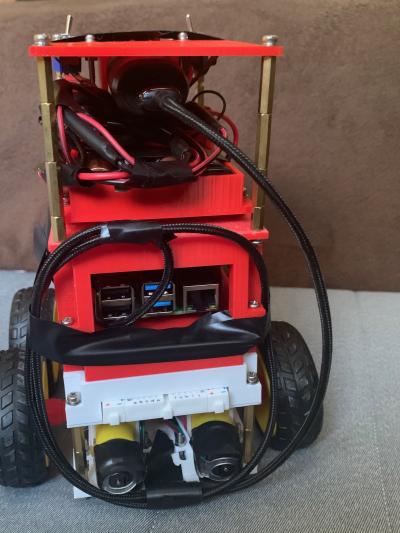 “When it first started moving, I was overjoyed.”

The robot is built like a 3-storey building with levels that resemble different floors and is controlled by a modified Xbox controller.

Lahl was attracted to the Electromechanical advanced diploma program at Humber because of the Industrial Automation project in its third year.

“We’ll have to assemble an industrial-scale assembly line that does a task, like a robotic bartender,” he said.

“One of the things we have to do before physically building it is building it within a virtual space using CAD (computer automated design). Through this robot, I got really good at CAD-ing things, designing things without actually making them.”

Assembly lines have always fascinated Lahl, even as a child. He always knew he wanted to “automate stuff” and work in the field.

Now he’s learning the skills to make that happen, practicing them at home and building on them for the future.

Another strong showing for Humber at Skills Canada Competition