“In those early days, we had lots of unknowns. All of us were focused on our students. We had something like 1,400 residents living with us on both campuses,” said D Merkley, front desk coordinator at Humber’s Lakeshore campus.

“The majority of students chose to move out at the end of March, so we facilitated safe and efficient move-out for students. We also housed those students who didn’t have anywhere to go. We made sure that we were not abandoning them.”

Those who remained in residence had to follow strict protocols, like not being in each other’s rooms and limited access to common areas such as kitchens and lounges. 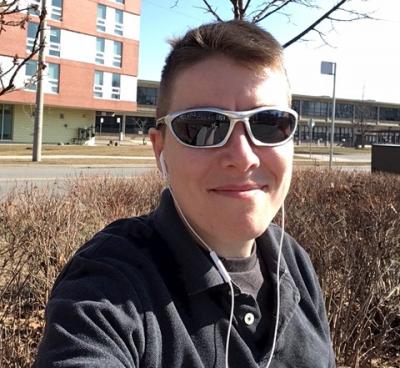 According to Merkley, students are “rolling with the punches,” as the protocols have evolved.

The department waived fees for breaking the residence contract due to early move out. Students also received a large portion of their residence fees back.

In the first few months of campus closures and restrictions, Merkley and their staff drew on past experiences.

“We’ve had lots of opportunities for our team to come together for students,” they said.

The last time there was a major incident was in February 2018, when a watermain break on North Campus forced an evacuation of 1,000 residents.

The team called hotels and arranged a bus to get the students there, ensuring each student had gift cards for food.

“That spirit helped us in early March as we were facing this unknown situation,” said Merkley.

One way the department is addressing the current unknown situation is by shuffling staff as needed.

“Our full-time staff have been asked to help out in different areas than they maybe would in normal times. We’re assisting one another, managing duties. .” 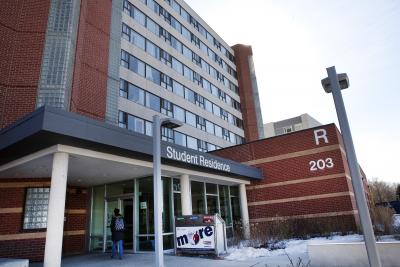 The shift has ensured that there is always a full-time staff member at the front desk to assist students.

Humber residences are now operating at reduced capacity. Students who have on-campus classes and instruction are prioritized, as well as those who may not have what they need to study at home, like an Internet connection.

When students moved in at the end of August, they were met with new safety protocols.

“We did a radical revamp of the process. Normally we have students all around with a big tent outside our building on campus – the traditional vibe you might imagine,” said Merkley.

This year, students were allowed to sign up for appointments to drop off their luggage early, so they wouldn’t have to worry about crowds or elevators on move-in day.

They could also make appointments for a drive-up check-in.

Parking spaces were allocated outside, then staff members came by the vehicles to communicate with students, register their guests, review COVID-19 protocols, give them their residence cards and send them to the move-in zone.

“I’m happy we were able to redesign our software and communicate to students in a different way. I personally checked in almost everyone at the Lakeshore campus, so I’ve had students come back and say they remembered that and like that they can see my face and know who I am,” said Merkley.

Merkley’s department is engaging with students regularly and hosts an online forum so people can get together and be social.

Despite reduced capacity, Humber residences are providing an important service to students.

“Folks have been great at keeping each other motivated,” said Merkley.