It started as an informal Blackboard Collaborate session meant to give students from Humber’s Public Relations graduate certificate program a place to study alongside their peers.

Since then, the Study Buddy program, hosted by program coordinator Annette Borger-Snel, has become a hangout of sorts, where students can ask her questions, socialize and have the odd baking competition.

“It’s become a family affair on this side. My daughter pops in, my dog is barking in the background,” said Borger-Snel.

The session is open to students in the program every Tuesday and Thursday, from 8 p.m. to 10 p.m.

Attendance is optional, but it attracts about 20 people every night.

For students who started the program in September, every course has been online, so Study Buddy has been providing a social aspect they may be missing.

“It’s PR, so you’re used to working with people and constantly engaging. It was hard on everybody,” said Borger-Snel.

While she praises her students - and the Faculty of Media & Creative Arts – for their ability to “turn on a dime,” the sense of engagement just wasn’t the same.

“Study Buddy is meant to be uplifting and amplifying,” she said. 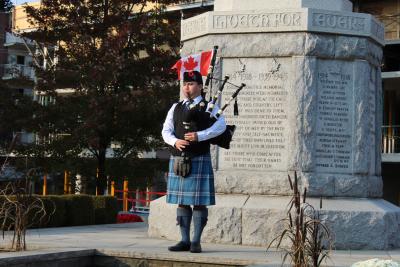 “We're a community. I remind them that this is a profession of kindness. Our job is to find positive solutions, positive ways to communicate and using our talents for good.”

“Not just a resource”

When Borger-Snel announced the initiative to PR students, the first thought that came to first-year student Mathias Ho’s mind was: “Why would I not want to take advantage of this?”

“There was no structure to it and we didn’t have to talk about academics. It was really an open forum where student mental health is at the forefront,” he said.

Recently, he joined one of the sessions after receiving a disappointing mark on a group project.

“The class energy was feeling kind of down and so many people came onto Study Buddy. They needed someone to talk to and, because Annette was there, they knew she was available. Students know it’s accessible,” said Ho.

"I felt the energy was so low and I thought ‘you know what – now is the time.’”

He pulled out his bagpipes and launched into “Scotland the Brave,” just to lighten the mood.

Afterward, classmates messaged him privately, saying he made their evening.

“It's not just a resource. It’s a place where maybe I can be that assistance to one of my classmates. It really fosters a lot of unity in the program,” he said.

Borger-Snel plans to keep hosting the sessions as long as students are interested, or until they return to campus.

“I miss the community, both students and faculty. It will be nice to meet the new students in real life. We hope for that,” she said.

In the meantime, they can come together for a couple hours a few times a week to connect, share and sometimes to be entertained. The Study Buddy has stayed true to its roots as an academic support tool, but has also grown to support students’ social needs in ways Borger-Snel couldn’t have imagined.

#HumberTogether: Humber Esports teams adjust to the pandemic and a new kind of virtual world