A team of Humber College students captured first place in a competition with an innovative idea of using genetically modified trees that burn slower than typical trees to reduce the amount of damage caused by wildfires.

The team of Insurance Management – Property and Casualty students, Mateen Hosseiny, Michael Running, Harsh Gotmani, Sneha Jasapara, Labdhi Shah, Ajinkya Ghorpade, Kelly McWhinnie, and Ayush Singal, won gold in Cookhouse Labs’ WinterHack 2022. It was presented in partnership with the Insurance Institute of Canada and Humber College and gave students from colleges and universities 48 hours to come up with a solution to one of four challenges.

The challenge the Humber team chose was to come up with an innovative way of developing a solution to prevent or reduce the impact of wildfires.

John McNeil, a professor and program coordinator with the Insurance Management – Property and Casualty program, was impressed with his group for the innovativeness of the idea but also the overall strength of their presentation, which can be viewed on YouTube.

“The idea that they came up with was brilliant,” said McNeil. “They were up against some extremely reputable programs.” 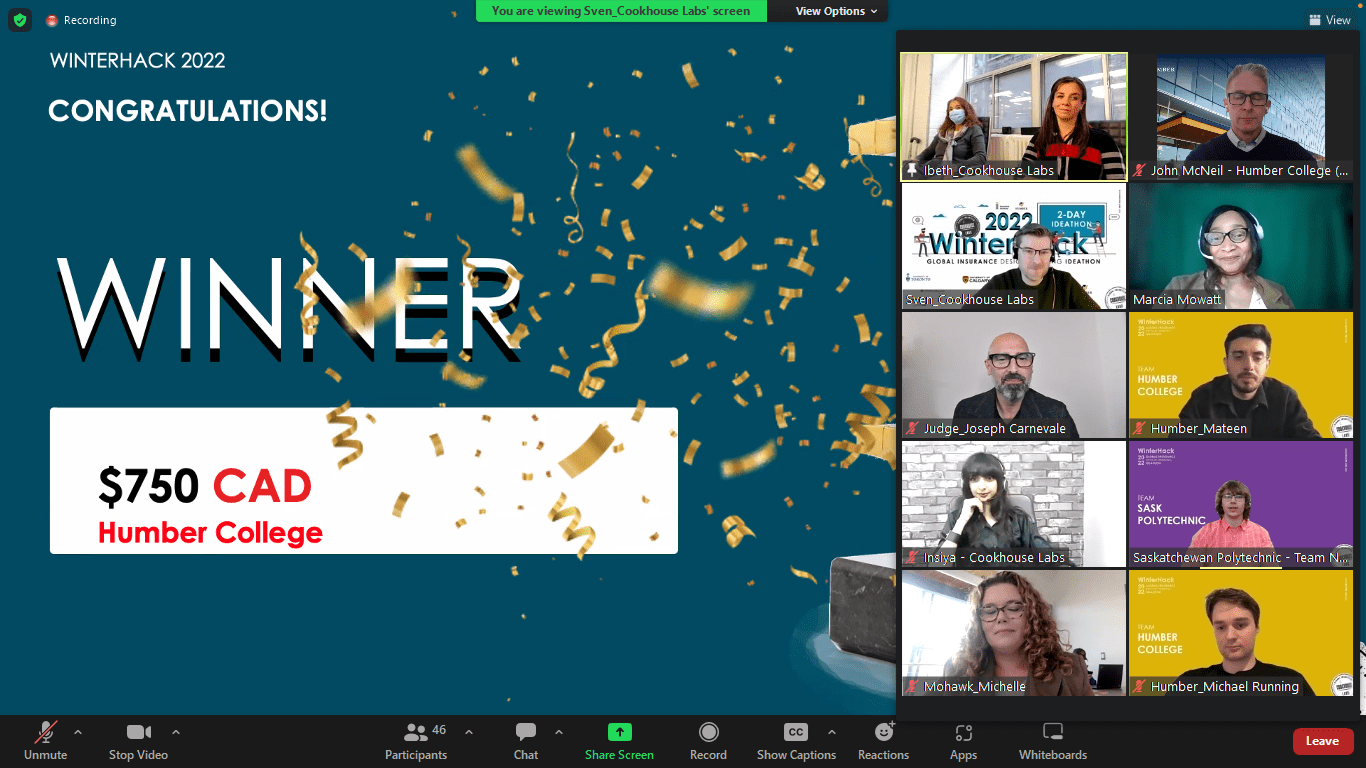 Running, meanwhile, said he learned a great deal about taking an idea from its initial stages to the final iteration or presentation while also learning how to work in a group with others.

“It really was a group effort,” said Running. “Every single person in the group deserves credit.”

Other schools to participate in the challenge, which was held both virtually and in-person, included Centennial College, Mohawk College, Conestoga College, Saskatchewan Polytechnic, the University of Toronto, the University of Calgary, McMaster University, and the British Columbia Institute of Technology.

There were many benefits for the students participating, said McNeil. They learned to collaborate and how to work towards tight deadlines with just 48 hours to prepare their pitch. Also, they developed their presentation and public speaking skills while getting to showcase their abilities to members of the insurance industry.

“Educationally, at the end of the day, it was a phenomenal experience,” said McNeil. “Just think about the confidence each of these students walks away with after this.”

In the group’s presentation, they pointed to the Fort McMurray wildfire in 2016. By the time it had been stopped, the blaze had burned 1.5 million acres, destroyed 3,200 buildings, forced 80,000 residents to evacuate the area and caused damages totaling almost $10 billion. The students suggested developing genetically modified trees for certain strains of poplar, pine and spruce that make up the majority of Canadian forests.

These trees would be denser, taller and with a higher moisture content than other trees along with water retention capabilities and an increased growth rate. These trees would help slow down the spread of a wildfire, decrease its intensity and give firefighters more time to contain and extinguish the flames.

This will save lives, protect local wildlife, and prevent billions of dollars in property losses, insurance claims and government aid, according to the presentation.

Shah said she was impressed with the final product and would recommend the experience for other students considering taking part in future hackathons. Through the event, she grew her network, exchanged ideas with other students, and developed her skills.

“Being a part of the Hackathon was amazing but finishing first was the cherry on top of the whole experience,” said Shah. “The team put forward an amazing effort.”

While the technology isn’t quite there to develop the trees the Humber group suggested, it was a forward-looking competition that encouraged the students to come up with creative ideas.

As Running noted, there was a “coolness” factor the judges considered when grading the presentations, which was one of the reasons they went with their idea.

“The goal wasn’t to come up with something realistic for today. They wanted new ideas and that’s what we were trying to provide,” said Running.

To find out more, visit the Cookhouse Labs website.