Artist Patrick Hunter is sharing his engaging artistic style with the Humber College community through a pair of installations.

Hunter created a mural on a wall in the University of Guelph-Humber atrium that incorporates an eagle feather and floral designs inspired by his Indigenous heritage. He also created a series of designs that have been installed on pillars in the library at North Campus.

Hunter, who is Ojibwe, hopes his art creates a greater sense of inclusion on campus for those who identify as Indigenous.

“The whole goal of the mural was to help make Indigenous students feel welcome and artwork is a great way to do that,” said Hunter. “I think having representation visually in public spaces does go a long way in making people feel like they belong there.”

An eagle feather is front and centre in the mural. Hunter notes that, in his culture, eagles carry good thoughts and prayers to the Creator and that when you find an eagle feather it can mean you’re on the right path or you’re being rewarded after a difficult experience.

Hunter painted the eagle feather for those who are on their post-secondary education journey at Humber. 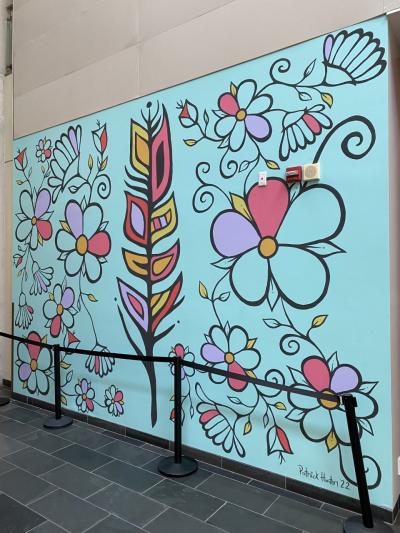 The Woodlands-style mural uses bright and engaging pastel colours to accentuate the floral designs and help bring the viewer’s eyes to the feather, which anchors the mural.

Hunter said florals are popular in Indigenous culture and they’re frequently used in beadwork. He wanted to provide his own artistic take on them in the mural.

Hunter wants his art to bring joy and happiness to the college community, particularly as we’re heading into the bleakness of winter. He also hopes it will expose non-Indigenous people to his culture.

“What I like about art is that you don't need language to understand it or to experience a feeling from it,” said Hunter.

One of the best parts of creating art is how people react to it, said Hunter.

“The joy on their faces and hearing they thought it was beautiful – that feels so good,” said Hunter.

His work in the library embraces tradition but with a modern take. The designs are inspired by Indigenous culture but were created using a computer program before being printed as wraps for the pillars. 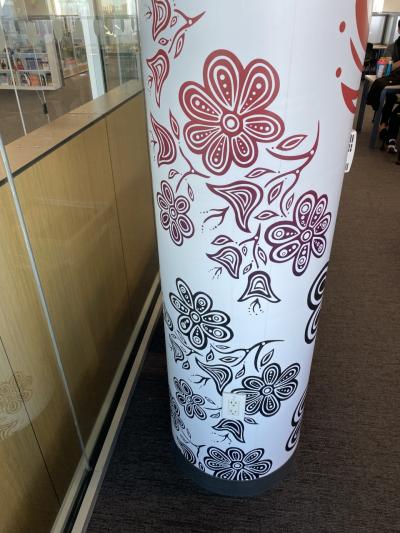 Hunter’s works can be viewed in buildings around Toronto including at the CBC, Toronto City Hall, and the Ontario Trillium Foundation, among others.

His advice for emerging artists is to just start creating – whether it’s with a brush, pencil or computer program.

You can find out more about Hunter and his work by visiting his website.