Some of the best Indigenous fashion and design was on display earlier this month at the Harbourfront Centre as part of the Indigenous Fashion Arts Festival.

Humber College is a sponsor of the festival that showcases Indigenous excellence and celebrates Indigenous artists and designers. It ran June 9 to 12 in Toronto.

“My favourite part of this festival would probably be seeing the alumni who used to be students. And now they’re working here,” said Kaitlin Oh’Kera Phillips, Indigenous health and wellness coordinator with Humber’s Indigenous Education & Engagement. “They’re helping plan this event, they’re on panels, they’re vendors and it’s really amazing we got to be part of making that connection for them and seeing their growth.”

Fashion stylist Scott Wabano, a graduate of Humber’s Fashion Arts and Business program, attended as a panelist and runway model. Humber student Jacquelyn Assinewe was also at the festival to represent her brand Assinewe Jewelry at the marketplace.

This year’s event had four theatrical runway shows featuring 25 designers over four nights. It also offered a marketplace with more than 60 artists and designers, hands-on workshops and a panel series of Indigenous thought called Fashioning Resurgence. 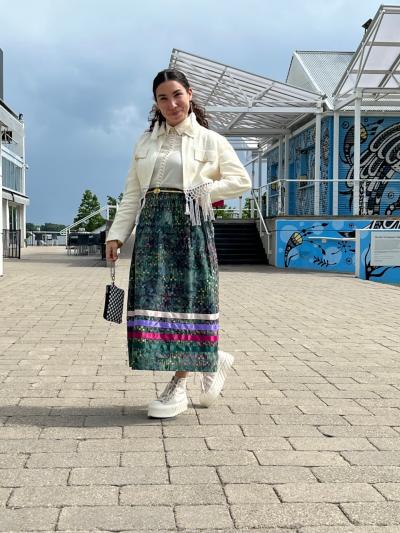 “Indigenous fashion is important because it’s now time for Indigenous people to start reclaiming the narrative and telling the story of who they are through all these beautiful different artforms,” said Kairyn Potts, an Indigenous social media content creator, television host and youth advocate.

Humber College remains committed to Truth and Reconciliation this Sept. 30 and beyond