Students in Humber College's Early Childhood Education (ECE) program have been learning online and, for one course, in-person throughout the past year, and they've made the most of their time at Humber's North Campus. The program's Etuaptmumk (Two-Eyed Seeing in the Mi’kmaq language) course on land-based play and co-learning amplifies the on-campus experience and brings them closer to the land and each other.

Etuaptmumk (Two-Eyed Seeing), brought forth by Mi’kmaq Albert Marshall reflects the interconnection of people and places by weaving ways of being, relating, knowing and doing from Indigenous and non-Indigenous worldviews. Humber College is located within the traditional and treaty Lands of the Mississaugas of the Credit, known as Adoobiigok, the "Place of the Alders."  The new course introduces Two-Eyed Seeing in that local context. 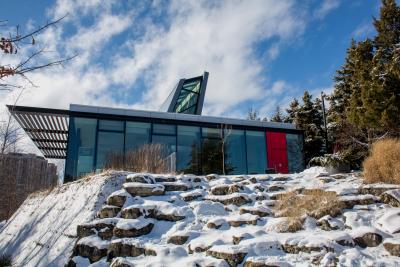 On one of the class' first outings last Fall, Louise Zimanyi and fellow professors Andrea Williams and Lynn Short walked the trails of the Humber Arboretum with their students, thoughtfully and with intention. Short led them to Grandmother Maple, telling the students her story along the way.

She is more than 200 years old, and Short encouraged the students to reflect on what Grandmother Maple has seen. The ECE students are also mapping natural places, learning about stories of each place from a Two-Eyed perspective, reflecting on what they see and feel. It is a way of "restorying" the place and renewing their connection to the Land.

It was the first time some ECE students had been on campus since beginning their four-semester diploma program, and according to Zimanyi, it was a powerful experience.

The Two-Eyed Seeing course is uniquely co-taught by Indigenous and non-Indigenous faculty. They share teachings and co-learn on the Land with their students who, in turn, have a better understanding on how to engage in good relationships with the Land and Indigenous communities. The ECE students don't take notes. They are there to experience, and whatever resonates will stay with them. When Knowledge Holders or Elders are sharing, students listen.

Bringing the Land acknowledgement to life

Two-Eyed Seeing helps students connect with the Land, each other and their own inner spirit.

"You're looking at different ways of knowing and taking that and saying, 'What does that mean in terms of action and responsibilities?' What do I need to do to be a good ally? What does it mean to learn from a Two-Eyed perspective, engaging spirit, heart, mind and body" said Zimanyi.

“In the words of Mi’kmaq Elder Albert Marshall whom we have been working with closely, nature has rights, and we have responsibilities. What we're doing is bringing the Land acknowledgement to life."

In early December, Zimanyi, Short and Williams took a small group of ECE students on a walk through the forest towards a special outdoor learning circle along the Humber River in what would be their last in-person class of the semester.

Short co-led the group that day, stopping periodically to share stories and lessons and reflect on the surroundings. 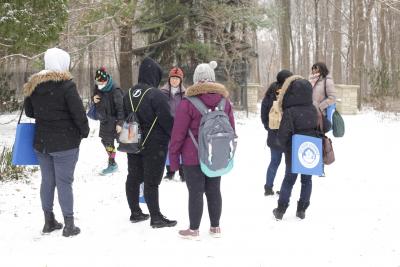 She stopped a few feet away from a droopy rhododendron and asked everyone to come closer.

"They're my outdoor thermometer," Short said to the handful of students.

"If the temperature is below freezing, the leaves conserve moisture by dropping down and curling up. When it is above freezing, they open and sit up," she continued.

Short often looks out her window at home to see how the rhododendron is doing.

The students nod, and some begin murmuring to the person next to them.

There's a lot of laughter during the time on the land.

They continued along the river to the learning circle, stopping on the way to wonder about tracks left by rabbits and squirrels. The area used to be arranged like a classroom, with rows of sitting rocks placed in front of a podium. ECE staff had the area rearranged and repurposed the podium as extra seating.  Circles represent many things in the natural world, recognizing interconnectedness and the value of everyone’s contributions.

Settling into the learning circle, Zimanyi, Williams and Short busied themselves with students assembling a Kelly Kettle, a large steel kettle that uses materials like pinecones, bark and twigs for fuel. 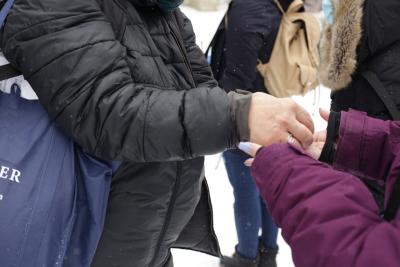 They passed around the tea, warm, citrusy and sweet, when it was ready.

Williams shared a teaching with the students and other instructors, describing various kinds of birds and their stories.

Indigenous stories and cultural teachings hold deep meaning and history, and often, these oral traditions cannot be shared without permission from a community, Elder or other Knowledge Holders.

“What has been shared with me around the protocols and importance of our stories is to always carry mindfulness. Be mindful of the purpose and meaning of our stories. Be considerate that some stories are from a family or meant to be told at a certain time,” said Williams.

She says it’s important to honour tradition and the teaching’s context, like which Nation the story came from and how it emerged,

“Also, honour your Truth, Culture and Family and share your own stories. There is so much strength and beauty to be reclaimed in the practice of traditional oral storytelling,” she said. 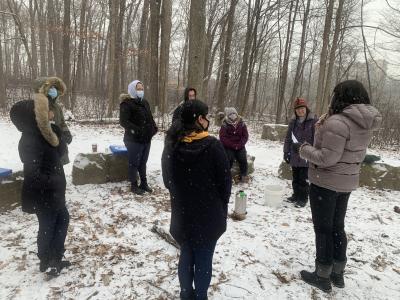 Usually, this would be when the class took out their phones, tablets or notebooks to record the highlights.

Instead, the students soaked it in, sat with it and reflected quietly.

"As they graduate, they're feeling more comfortable about building relationships with Indigenous community members and Knowledge Holders, also knowing which Indigenous Land(s) they're on," said Zimanyi.

Amy Thompson, one of the ECE students who participated in the last outing of the semester, was always fascinated with philosophy. That interest made the Two-Eyed Seeing course all the more compelling.

"Being able to learn about Indigenous ways and philosophy, I got to see how they both impact children and how you can teach them," she said, during a short break from a Two-Eyed Land-Based Play and Co-Learning research focus group after their walk.

"I was in Big Brothers Big Sisters as a kid, and my Big Sister was Indigenous and loved to teach me about different plants and so forth. So, I would love to be able to give that to somebody else."
She remembers the lessons, but what stands out most in her memory is all the fun she had.

While Thompson was already familiar with some teachings, her classmate Emily Bruni came to the class with very little knowledge of Indigenous culture and ways of being, relating, knowing and doing.

"I really like the connectedness we feel, connecting with Indigenous traditions. Before I started this course, I didn't know very much about Indigenous people. Now I have a sense of the languages, and I feel more prepared going into the classroom after this course," she said.

Bruni is engaged during class, often the voice asking questions that others may be thinking. That kind of exploration is strongly encouraged in Two-Eyed Seeing.

Soon, Bruni, Thompson and their classmates will co-facilitate the same kind of exploration for young children and families. Already, children at the Humber Child Development Centre are experiencing and engaging with the Land and learning about the interconnections all around them. 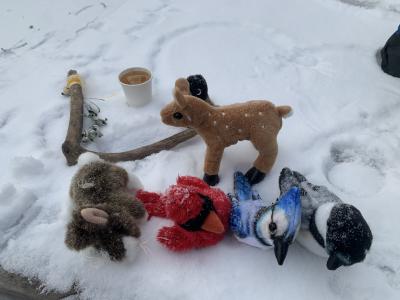 "When they are in the Arboretum, the children are in the moment.  They see things we don't necessarily notice," said Zimanyi.

The children have learned the words for water (Nibi), robin (Opichi) and tree (Mitig) in Anishinaabemowin from Knowledge Holders and storytellers.

The ECE course has been so impactful that students from other programs and faculties have inquired about taking the course as an elective or certificate course.

For now, the course will continue for ECE students, but the instructors say the sky is the limit for Two-Eyed Land-Based Play and Co-Learning, and there are exciting initiatives in the works.