Persad is a second-year Guitar major and just released “Cherry,” the first single off her album “Waves.” Humber Today caught up with Kiana to get the details on her music, her process and how Humber Music has helped her career.

HT: Kiana, your debut single has already been added to 500 playlists on Spotify, plus you appeared on the “New Music Friday Canada” and “Radar Canada” playlists the day your album was released. What’s it like to experience that kind of success right out of the gate?

KP: It was a shock.  When I released “Cherry,” I didn’t expect it to resonate with people the way it did. In fact, I only released it because I liked it personally. It was, and still is surreal to think that people all over the world are listening to and connecting with my music.

I have been writing since I was nine years old, purely because I love it. The fact that my songs are now having an impact on other people is extremely hard to wrap my head around, but in the best way possible. 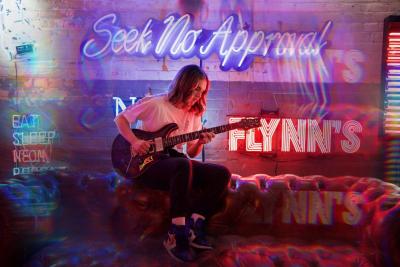 HT: What are some of the other career highs you’ve experienced so far?

KP: I would say my greatest success so far is being selected by PRS (Paul Reed Smith guitars), as one of their Pulse Artists.

As a guitarist, I have been a huge fan of the guitars they make and an even bigger fan of John Mayer, who is one of PRS’s biggest artists and has influenced my playing so much. I wasn’t expecting to be selected for the Pulse Class of 2021, but I’m honoured to say that I’m a member of the PRS family, which supports amazing guitarists around the world.

HT: It’s hard to believe you’re only in your second year at Humber College. How has the Bachelor of Music program influenced your music?

KP: The program has given me knowledge I would’ve never had otherwise. My song, “Cherry,” includes a lot of harmonies and a bebop-influenced solo that I was only able to achieve because of what I’ve learned from great teachers and accomplished jazz musicians like Jocelyn Gould, Jeﬀ King, Trevor Giancola and Nathan Hiltz.

Not only do we as students get to learn from our teachers who are all in the industry, we get to play with them. I have also met some of the most genuine and talented individuals amongst my peers. The sense of community at Humber is unmatched.

HT: What advice do you have for aspiring artists?

KP: Never forget why you started your musical journey. It's easy to get stuck in a boring practice routine, writer’s block or caring too much about what others think. If you make time to play what you love because you love it, the rest will come much easier.

My second piece of advice would be to explore, interact and listen to other musicians as much as possible. Music at its core is a way of communication, and you learn the most when you’re playing with and listening to those who share the same passion.

To learn more about Kiana and her music, visit www.kianamusic.ca