Scott Wabano, who uses the pronouns they/them, was an accomplished designer even before they enrolled at Humber College.

The current Fashion Arts & Business student grew up on Moose Cree First Nation in Moose Factory, Ontario. Their journey to Humber was challenging, but they count themselves fortunate to be thriving at college and in their professional life.

“Originally I wanted a clothing line,” they said.

The Wabano clothing line, focused on Indigenous fashion, was launched two years ago.

After being exposed to the different facets of the fashion industry at Humber, their focus turned to styling and their own agency. They also have aspirations of owning an Indigenous retail store.

Each of the initiatives are part of the Wabano brand.

They met people from different backgrounds and cultures in the city. Wabano was raised to keep an open mind and they filled it up with new friends and connections while living with a relative to complete school. After graduating, they struck out on their own for college.

“Humber is well-known for Business and I wanted to take my business to the next level,” they said.

The years away from home have had an impact on Wabano, who misses their family. However, the absence of a close support system led to the development of their sense of self and ambition.

Wabano didn’t have any friends or contacts in Toronto when they started at Humber in January 2017. They knew they had to push themselves to find community.

Like many Indigenous students, their first stop was the Indigenous Education and Engagement (IE&E) department. Wabano immediately clicked with the staff and students they met there.

“I knew they would know what I was going through. They would know exactly the type of situations I’m in and the emotions I was feeling,” they said. 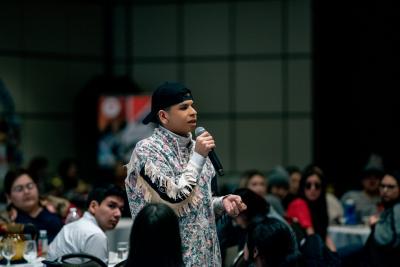 “As Indigenous people, we are very in tune with ourselves and our culture. Without that, we don’t have much guidance or support. The Indigenous Education and Engagement community gives us that.”

Wabano took a break from their studies in 2018 to refocus and take care of themself.

“I struggled with finding my true passion in life so I took that year off and it gave me time to reflect and focus on my mental health and the long-term goals I have for myself and my people as well,” they said.

One year later, Wabano is back at Humber and more ambitious than ever. They won the Indigenous Community Leadership Award at the 2020 Indigenous Student Awards.

Wabano mentions IE&E frequently in conversation, and always with fondness.

“They even presented me with an opportunity that helped me get a job with Manitoba Mukluks.  I started working for them as a store manager after they invited the vice president of Marketing for a career day,” they said.

Wabano has since worked closely with Lesley Hampton, an Indigenous designer and advocate for body positivity, mental health awareness, and authentic Indigenous representation through her work.
Wabano completed their internship with Hampton and the two are collaborating on a project set to launch in the fall.

“We grew a great friendship and mentorship. I am an Indigenous 2Spirit person who shares the same values and admiration for design as she does,” they said.

Wabano was also recently chosen as an Ambassador of Hope for the WeMatter organization and helps uplift and mentor youth in the community.

They have even become an advocate for Humber.

“I would tell Indigenous youth thinking about going to post-secondary to come to Humber and get out of your comfort zone. I know it’s hard to open up, but you can do it,” they said.

Wabano’s unique trajectory helped them develop a certain resilience they want to share with their community at Humber.

By inviting Indigenous youth to express and take care of themselves, they hope to inspire the same kind of resilience – the kind that can’t be taught.

A shared responsibility: National Day for Truth and Reconciliation at Humber College