A new initiative from Humber’s Early Childhood Education (ECE) program focuses on teaching students, educators and the community to co-learn from the land using Indigenous and non-Indigenous perspectives.

The program is based on the guiding principles of Etuaptmumk/Two-Eyed Seeing (in the Mi'kmaq language) brought forward by Elder Albert Marshall.   Two-Eyed Seeing reflects the interconnection of people and places within the traditional and treaty lands of the Mississaugas of the Credit, known as Adoobiigok, the “Place of the Alders,” by exploring ways of being, knowing and doing from Indigenous and non-Indigenous worldviews.

The initiative recently received funding from the Lawson Foundation’s Outdoor Play Strategy 2.0. to support eight regional demonstration projects across Canada. The Strategy’s aim is to build capacity in adults working with children to support outdoor play in Early Learning and Child Care.

Humber College’s North and Lakeshore campuses are located within the Adoobiigok region, which historically provided a connection for Anishinaabe, Haudenosaunee, and Wendat peoples between the Ontario Lakeshore and the Lake Simcoe/Georgian Bay regions. Now home to numerous nations, Adoobiigok continues to provide a vital source of interconnection for all, including the Humber College community.

A Two-Eyed Seeing approach engages students, educators and families to see the land as teacher. 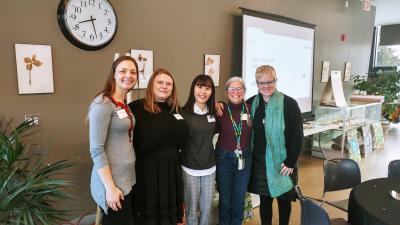 “This new course plants the seeds of sustainability as it relates to engaging in respectful, reciprocal and responsible relationships with places, plant-life, animals and other-than-human beings for the benefit of all.”

As with land-based play, the children who will participate in the program will run, climb, splash in puddles and engage in different types of play in all seasons.

“Through Two-Eyed Seeing, they will also learn that the Humber River, also known as Gaabikanang Ziibi in  Anishinaabemowin, has a spirit, that the water is alive and has a story and will continue its life long after we are gone,” said co-lead Lynn Short of Indigenous Education & Engagement and the Humber Arboretum.

The Two-Eyed Seeing program is the culmination of years of work and research.

As the work and research explored other worldviews regarding land-based play, Short began to walk with the children, families and educators on the land in 2017.

In embracing a Two-Eyed Seeing approach, both Indigenous and non-Indigenous perspectives will influence land-based play and co-learning.

“With this project, we will be braiding an Etuaptmumk/Two-Eyed Seeing approach, which infuses the strengths of Indigenous and non-Indigenous ways of being, knowing and doing as guiding principles for co-learning," said Regina Hartwick, associate dean of Indigenous Education & Engagement.

"A strength of Etuaptmumk is that it engages Indigenous and non-Indigenous faculty, Elders, Knowledge Holders and students as equal partners in the learning process."

Short and Zimanyi are working in collaboration with a working group of ECE faculty members including Olga Rossovska, Bora Kim and Lyndsay Macdonald, Indigenous Education & Engagement, the Humber Child Development Centre, Humber Arboretum and Centre for Urban Ecology, City Wide Training, Applied Research and Innovation and the Centre for Teaching and Learning.

Humber Alumni Spotlight: Lawrence Saindon talks about how Humber College helped prepare him for a successful career as a paramedic