Anthony Johnson’s journey to Harvard was long, arduous and riddled with racism – both personal and institutional. Originally from the Navajo Nation, Johnson pursued a degree in economics at the Ivy League college. The experience helped form his future endeavours and activism, which eventually brought Johnson and his husband, James Makokis, to Humber College to spread their message of inclusivity.

Recently, Principal’s Office at Humber’s Lakeshore Campus, in partnership with the Human Resources and Organizational Effectiveness Team and the Indigenous Education & Engagement department hosted Johnson and Makokis for a Humber Wellness Talk.

They shared their journeys of personal transformation from young people facing adversity to highly educated leaders and activists. In front of a virtual audience of Humber students, staff and community members, they explored the impacts of colonialism on Indigenous people and how we all can build a culture of inclusivity.

During his formative years at Harvard, Anthony Johnson was one of few Indigenous students. The Two-Spirit artist and activist was tasked with educating his peers and trying to explain his upbringing which was so different from the white, economically privileged masses.

“How do you tell people that you grew up with brothers and sisters who are actually your cousins? It doesn’t matter in the Navajo culture,” he said.

Johnson was also coming to terms with his identity. He grew up with an idea of manliness and masculinity that he couldn’t identify with.

Then he found the term Two-Spirit, an Indigenous word for a person who identifies as having both a masculine and a feminine spirit. Two-Spirit individuals play an important role in Indigenous traditions and spirituality.

When Johnson was introduced to the history of Two-Spirit people, he felt seen. He describes it as “an Ariana Grande hair-flip moment” after years of feeling out of place.

However, the challenges kept coming, but he adapted, learning to take care of his health and wellness, all the while building the strength of his voice and message.

Johnson is now married to Dr. James Makokis, a Two-Spirit Indigenous Health and First Nation expert from Saddle Lake Cree Nation in Alberta. In 2019 they were the first Two-Spirit couple to compete on The Amazing Race: Canada.

The couple’s appearance on The Amazing Race: Canada was political and boundary-breaking, but they sought further opportunities to highlight their community at every turn, from what they wore to their team name, Team Ahkayeimok, which means “keep going” or “don’t give up” in Plains Cree.

They also wore red ribbon skirts in the season finale, representing missing and murdered Indigenous women and girls, and a nod to transgender and Two-Spirit people. With crests on their backs and moose ties in their hair, Johnson and Makokis brought Indigenous culture to an audience of 2.5 million. 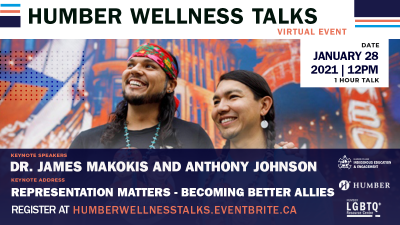 Then, they won. It was an historic moment for representation on Canadian television.

During his portion of the presentation to the Humber community, Makokis spoke of his upbringing, the racism he faced in daily life and, especially, at medical school. Some colleagues and more senior doctors questioned his expertise in his clinical placement, and even his authority to be in the room. He reflected on the effect such systemic violence and racism has on the Indigenous community as a whole.

“We have to be able to accept people from Indigenous experiences because they are the ones who will go back home and make a difference,” said Makokis.

Makokis recited a quote during his presentation, first written in an academic paper by his uncle, Dr. Vincent Steinhauer, who coined the term Modern Day Warrior.

“A modern-day warrior will have their pipe in one hand and a laptop in the other, using both tools equally.”

It’s almost as if Steinhauer could see the role his kin would play in the future.

“There seems to be an era of cooperation among like-minded folks,” he said.

“But it needs to start with truth first. We need to be telling the truth and you have to confront that with more talks, more education.”

There are opportunities all around us for both Indigenous and non-Indigenous people to seek justice.It can be as simple as smiling at someone, or making eye contact instead of looking away when someone walks toward you on the street.

From there, he recommends that student organizations have maximum representation on their boards and form partnerships with other organizations and staying aware of diversity policies.

“It’s about making sure conversations are being had and making sure those are really transparent. If you know what I’m doing and why, and how I’m doing it, that by default is inviting people to let me know to make adjustments and accommodate,” he said.