Discus thrower Renée Foessel’s athletic pursuits require strength, hard work and laser focus. The qualities that propelled her to a fourth-place finish at the last two Paralympic Games also helped her complete a diploma in Community and Justice Services and a degree in Criminal Justice at Humber College.

The Peel region native worked through school and still managed to travel around the world with Team Canada. She also found time to volunteer at several organizations, including the John Howard Society, where she completed a work placement and was later offered full-time employment.

It’s a delicate balance, but Foessel has perfected it. She’s had years of practice. 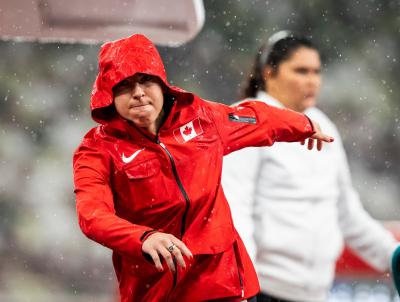 Foessel first competed on the international stage at the world championships in Christchurch, New Zealand as a tenth grader. The following year, in 2012, she was just shy of making the team that would compete at the London Olympics.

“That first experience in Christchurch is something I hold dear for various reasons,” said Foessel.

She was born with cerebral palsy, which affects one side of her body. In the Paralympic sport classification system, each athlete is assigned a classification based on their disability and competes against those in the same classification.

At the time of the competition, Foessel was training in three events: shot put, discus and javelin throw.

“I was in an F37 classification and was reassigned to an F38 and went from doing three events to only being able to compete in one, which was my worst event, javelin throw.”

Foessel says she finished last, but the experience was a “growth moment.”

“I learned that you have to enjoy what you’re doing, no matter what. It was difficult, but I learned very quickly, you have to take in the situation and be resilient. It was an integral moment for me that allowed me to understand that I really want to pursue this,” she said. 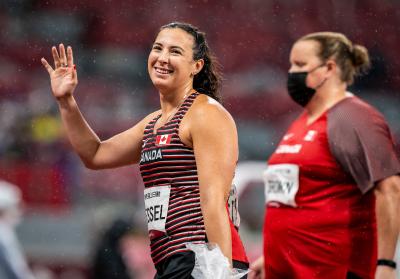 Foessel faced an even more formidable challenge as the world watched her compete in Tokyo on September 4. Team Canada was prepared to compete in 40 C heat, but a few days before the event, the thick humidity was replaced by colder temperatures and torrential downpours. She performed well but narrowly missed the podium.

“I have a lot of respect for the women in my field who pushed through those conditions. It was a remarkable showing in my event, and I can’t wait to see what the future holds for these women and myself in future events,” said Foessel.

As in 2011, Foessel walked away from the 2021 Paralympic Games with her ever-present positive attitude.

World Championships will be held in Japan again next year – at the height of typhoon season.

Foessel, who put her degree to use as a records and information management clerk with the Barrie Police Service, is already a success, Paralympic medal or not. She holds the world record in her event, after all.

She’s taking a short break from the competition to plan for next year and set short-term goals. After a decade of high-performance sport, she’s nowhere close to finishing.

Next season, she wants to break the record again.

When she does, her family, friends and fans at her alma mater will be watching.