A recent 3M study found that 96 per cent of Canadians agree the workforce needs more skilled trade workers and that 92 per cent believe there’s a lot of opportunity in the skilled trades.

However, 76 per cent said they would never pursue a skilled trade for themselves.

Humber College has a robust offering of programs for those looking to enter the skilled trades and, if you ask Philip Stubbs, director, Academic Programs at Humber’s Centre for Skilled Trades and Technology, he will tell you there are many reasons to explore a career in them through Humber.

Stubbs says careers in the trades are stable, offer plenty of opportunity for full-time employment and are in demand. Those in the skilled trades with an entrepreneurial side can also take their skills and start their own business, he added. 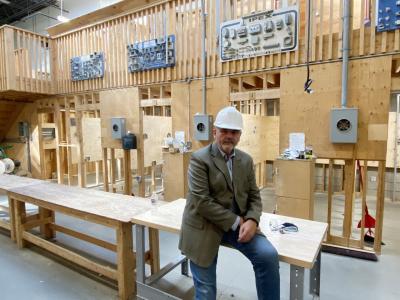 Those with a green thumb may want to explore Humber’s Arboriculture and Horticulture Service trades that includes programs such as Urban Arboriculture - Tree Care and Arborist Apprenticeship.

There are also the Manufacturing and Mechanical trades offering programs including Heating, Refrigeration and Air Conditioning Technician, Plumbing Techniques, and Industrial Electrician Apprenticeship, among others.

In the Construction, Building and Finishing trades, Humber offers a number of programs including Carpentry and Renovation Technician, Construction Engineering Technology, and Industrial Woodworking Technician.

Stubbs notes that there’s a shortage of skilled tradespeople and their skills are increasingly in demand.

Stubbs said there is a sentiment that the trades are a less desirable option when it comes to post-secondary education and that they’re for people who don’t have the grades for university. While he doesn’t agree with that belief, Stubbs said it’s a notion they address through outreach and education.

One of the ways they’re introducing potential students to the trades is the Pathways to the Skilled Trades program. It’s just eight weeks in length and is funded entirely by government so it’s offered at no cost. The program also offers employment support for individuals to get started in the trades.

It’s intended for those who are unemployed, interested in exploring the trades and are experiencing financial hardship. It’s designed to help learners make the transition into the trades whether they’ve completed high school or not.

Another form of outreach has the college sending out about 800 birdhouses to students in Grade 6 to Grade 8 over the past two years. They then have a representative come to the school to talk about the design principles of the birdhouses (which can be put together without glue or nails) and the equipment required to build them before they put them together in the classroom.

Meanwhile, the Centre for Skilled Trades and Technology is growing with a more than 16,000 square-foot expansion underway with a 2023 targeted completion date. Once finished, it will offer additional learning spaces and facilities including a refrigeration lab, a gas and oil lab, an AR/VR/XR simulation studio, a heat plant, and more.

The centre is also keeping up with current trends by having lab spaces that can be changed to reflect emerging technology. For example, there are plans to install an electric vehicle charging station for the students to practice on so they’re equipped to deal with the technology when they enter the workforce.