The Humber Hawks men’s soccer team is the best in the country for the second consecutive year.

Seneca opened the scoring in the gold medal match, which was held at Willoughby Field in Langley, British Columbia. However, in the game’s 89th minute and with time running out, the Hawks evened the score after a shot by Santino De Bartolo deflected off a Sting player and into the Seneca net for an own goal.

In extra time, Federico Leal pounced on a rebound to score the go-ahead goal. The Hawks never relinquished the lead and became national champions for the ninth time and seventh in the last 10 seasons.

It was coach Michael Aquino’s sixth national championship in seven seasons with the team. 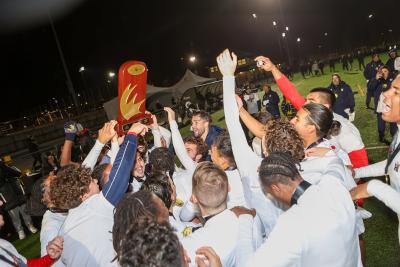 Danny Medeiros was named the player of the match while Luca Uccello (2022 CCAA Player of the Year), Damion Kaye, Alex Meczarski, and Leal were named to the all-tournament team.

"The feeling never gets old," said Leal, who along with teammate Osman Hussein ended their Hawks’ careers as three-time national champions. "It's my last year. There's no better way to finish it. Great group of guys, we are a family, and I'm happy to do this with my brothers."

Humber finished the season with a perfect record of 16-0-0, just the second time that feat has been accomplished in the program’s history.