For the first time in its history, Humber College will present students who self-identify as Indigenous with Indigenous medallions to wear during convocation.

According to Jason Seright, dean of Indigenous Education & Engagement (IE&E) at Humber, the idea came from his department’s student support team who wanted to braid Indigenous ways into convocation.

The medallions are a way for the students to display pride in their history and culture. They also acknowledge the graduates’ accomplishments and underscore the importance of the tradition of gift giving to Indigenous peoples.

“It’s part of many Indigenous nations to gift during special times and, in our way, we are gifting to our graduates and celebrating their success with them,” said Seright. “We are proud of our graduates and who they are, and the group just thought it would be nice to express that by gifting the medallions.”

Bachelor of Public Relations graduate Michael Jenkins wore a medallion during convocation. When he heard about the plan to gift them to Indigenous students, he thought it was a wonderful idea.

He wore the medallion to pay tribute to IE&E for the support they provided him during his time at Humber. It was also a symbolic way to bring the group that meant so much to him onto the stage with him while he graduated.

“It was a really emotional experience,” said Jenkins. “It was a nice gift. I really felt the importance of carrying it with me.”

“It’s something to be proud of,” he continued. 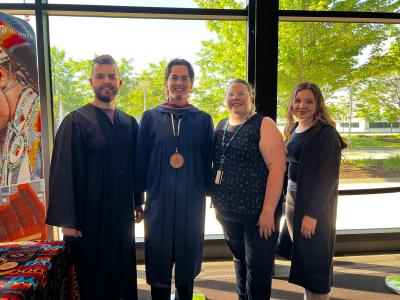 The medallions were made by Mikmaw artists Born in the North, who also designed and created medals made from moose hide and Indigenous beadwork in recognition of the Moose Hide Campaign that were distributed during the CCAA Men's Basketball National Championships earlier this year.

The lanyard was made by a Metis artist named Beaded Bear.

Meanwhile, Seright hopes this will become an annual tradition at Humber and a way to continue to build equity, diversity and inclusion with Indigenous learners at Humber.

Humber College remains committed to Truth and Reconciliation this Sept. 30 and beyond