The Humber Hawks are the 2022 – and seven-time – CCAA Men's Basketball National Champions after defeating provincial rivals St. Clair Saints in front of a sold-out North Campus crowd with a final score of 101-94.

The victory caps a remarkable season for head coach Omar Miles in his rookie season leading the team. “This is like a dream and very surreal. Truthfully, I imagined winning a national championship with Humber but not this soon,” said Miles.

He continued, “with the many up and downs in terms of building a roster during the pandemic, I could never imagine we would do it with only 11 players. The buy-in and commitment that each player and coach displayed was something very special.” 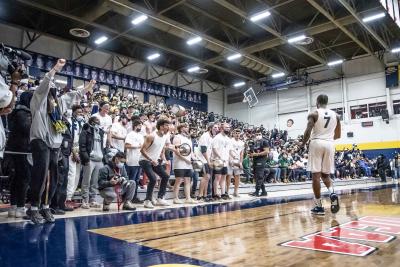 Humber had a strong opening quarter, using a 14-0 run in the first to build a double-digit lead. The Hawks shot an impressive 10-of-18 (55.6 per cent) in the frame on the way to 26 points. DeQuon Cascart and Dwayne Lambert-Cadore led the way for Humber combining for 16 points. Cascart would go on to be named the Hawks’ player of the game.

The national championship game was a repeat of the provincial championship with the Hawks and Saints facing off once again. The Saints trailed at the half but played hard throughout the second half to bring the game back within two possessions with just one minute left to go. However, the Hawks’ defence stood strong, and the team took back control to go on to win the championship.

It was a particularly meaningful victory, because it happened in front of a home crowd, and because of the award ceremony. In addition to the gold medals from the CCAA, the champions were also awarded medals made from moose hide and Indigenous beadwork. These were given as gifts by Humber’s Indigenous Education and Engagement department in recognition of the Moose Hide Campaign. 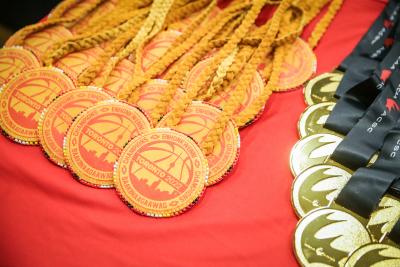 This campaign is an Indigenous initiative led by those who identify as men that raises awareness for ending gender-based violence, particularly against people who identify as women and children. On May 12, campaign supporters wear a pin made from moose hide to raise awareness and make their own unique pledges to address this issue.

Elsewhere across the country, Humber athletes were chasing national titles to follow up on an incredible 24-hour span the previous week in which four teams won provincial championship titles on the same night. The women’s basketball team, playing in British Columbia, was eliminated in the bronze quarter-final. The men’s volleyball team lost in Quebec in their bronze semi-final as the Redeemer Royals exacted revenge for their loss in the Ontario championship game. Meanwhile, the women’s volleyball team also lost in the bronze semi-final match in PEI.