How do young adults navigate the safe use of legal cannabis when they grew up hearing only about its dangers?

A research initiative led by Daniel Bear, a professor in Humber College’s Faculty of Social and Community Services, seeks to understand young adult cannabis consumers, how they're getting their cannabis information, and which myths they're still hearing based on prohibitionist drug education.

The Engaging and Educating Young-Adult Cannabis Consumers (EEYCC) project launched in 2020 with funding from a Natural Sciences and Engineering Research Council of Canada (NSERC) College and Community Innovation Fund grant that was awarded to Bear as the principal investigator.

Young adults across the country are familiar with school programs like Drug Abuse Resistance Education (DARE), which urges students to abstain from using drugs and alcohol. Legalization of cannabis, however, has highlighted the need for alternative, fact-based resources.

Instead of making alarmist claims or stigmatizing users, harm reduction education focuses on helping people understand how to be safer, reduce risk and minimize adverse results. The lack of understanding around safe substance use gave rise to myths, especially among young people. Illegality also led to confusion.

DARE participants are now young adults living in a world where cannabis use is legal and more openly used but where misinformation persists.

Myths abound, from the belief that holding in your breath while smoking cannabis enhances the high, or that you can overdose on the substance. Myths and misinformation persist largely because cannabis consumers lack access to trusted, science-based sources, and instead rely on information from less trustworthy sources such as friends.

EEYCC has three phases: data collection, development and production of educational materials and a launch and review phase where researchers track the uptake of materials.

Bear and his colleagues are currently in the third phase of the project and are soliciting feedback from partner organizations and will start to collect data about the use of the public education campaign after its release. They will analyze the data, revise or update their resources, and disseminate the information later in the year. The goal is to create effective, stigma-free and honest public education materials. 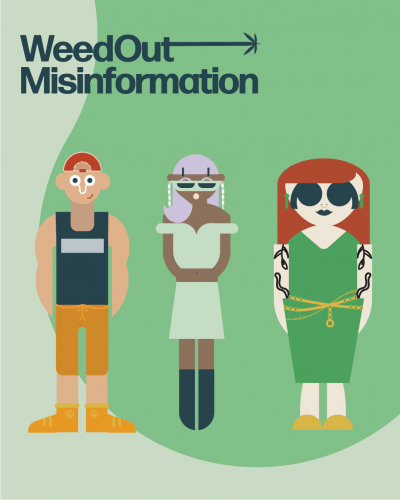 EYYCC also provides a work-integrated learning opportunity to several student research assistants in the Bachelor of Creative Arts (BOCA) and Faculty of Social and Community Services (FSCS). The BOCA students worked on recruitment and developing campaign materials. They pitched projects to the lead researchers who chose two and brought them to focus groups with cannabis consumers, budtenders and other cannabis professionals in the medical, public health and drug policy sectors.

For BOCA student Madison Rogers, the market research revealed a need for diversity.

Rogers' FSCS counterparts collected and analyzed data from focus groups and other resources.

"One thing that surprised me in the literature was the conflicting evidence regarding cannabis consumption and psychotic episodes and panic attacks," said research assistant Marta Minta.

Before her work with EEYCC, Minta thought cannabis could cause or increase the occurrences of mental health disorders.

"The data suggests that's not always the case, and we cannot certainly say that cannabis consumption is, in fact, responsible," she said.

Minta says it's crucial for young people to be able to make informed decisions based on empirical evidence – and that it should be accessible.

The campaign, "Weed Out Misinformation" has cleverly-named resources, such as "pre-rolled" answers to common questions, but the information they disseminate is carefully researched and, according to Bear, is likely to be held to a higher standard than other projects.

"There's a real duty to get it right, particularly when there's so much information," said Bear.

"There's also a real duty to listen. It's important to bring people in, do a human-centred design on this."

Many of the EEYCC resources are designed to be displayed in retail stores and support the messaging of budtenders. They're a tool to engage people, especially new users, and have information about dosage, safe settings and other harm reduction and public health information.