Momentum is building for Humber College’s reusable food container programs that are making a big difference in reducing the amount of waste the college generates.

The Humber community is getting behind the transition from disposable containers to reusable ones at several of the college’s cafeterias and dining locations at both North Campus and Lakeshore Campus. The goal is to reduce single-use packaging waste that ends up in landfills and to be more sustainable.

At North Campus, there is the O2GO program and at Lakeshore Campus it’s Friendlier. Users pay a deposit and receive their meals in containers that, when finished being used, are cleaned and sanitized to be used again.

Last year, about 100,000 single-use containers were saved from becoming landfill thanks to the initiative. The success of the project inspired the college to adopt it more widely across both the North and Lakeshore campuses.

“We’ve received a lot of comments from people saying they like the programs and think they’re a really good idea,” said Hentschke.

Participants pay a one-time fee of $10. When their meal is finished, the containers are returned to O2GO machines in exchange for a token that’s redeemed at their next meal for a clean O2GO container.

At Lakeshore Campus, all meals from the Lake Café and Commons Eatery will be served in reusable Friendlier containers. People pay a refundable 50 cent or $1 deposit depending on container size and, once the meal is finished, they can scan the container using the Friendlier app to claim their deposit or donate its value to a charity of their choice.

After being scanned, the containers are dropped off at a collection bin to be collected, washed, and sanitized for reuse. 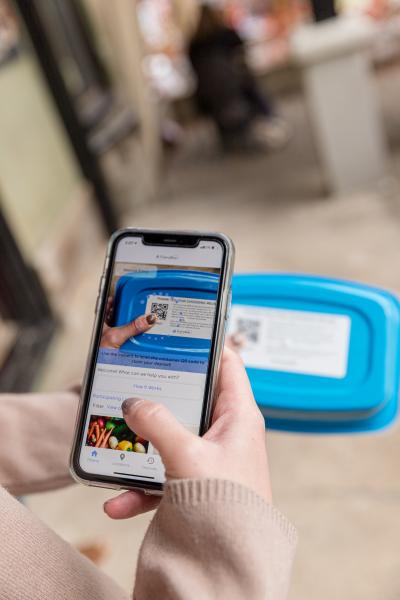 It’s estimated that, by eating two meals a week in a reusable container, one person can keep about 50 containers from going to landfill in a school year.

The Office of Sustainability will be launching a survey during Waste Reduction Week, which runs October 17 to 23, to receive feedback from the Humber community about the programs. They will also be attending upcoming Residence and Food Forums to hear directly from those in residence.

Hentschke said, for example, a few users of O2GO have said it’s easy to lose the tokens. So, they’re giving away token holders, which are similar to a keychain, to address the issue.

“It's about making that reusable and sustainable option appealing and easy for people as much as possible,” said Hentschke. “We want to reduce any barriers to access and make it something that works for the entire Humber community.”

Another initiative that’s further reducing waste on campus was Humber’s introduction of low waste event spaces this fall. These designated spaces include the Barrett Centre for Technology Innovation at North Campus and G Building and the Student Welcome and Resource Centre at Lakeshore Campus.

All food at events taking place in these spaces will be served exclusively on china dishes that can be washed and reused. Disposable plates, cutlery and glasses will not be available.

The college is aiming to increase the number of low waste event spaces in the future.

Hentschke said they’re hoping to see participation in O2GO and Friendlier grow as the year goes on with more outreach and education. They also hope to continue to expand the program to more locations at both campuses serving food.