Humber College students are constantly innovating to solve real-world problems, even before they graduate. The impacts of their projects are felt in industries like arts and culture, advanced manufacturing and healthcare. This summer, seven students from the college’s design programs worked to change the way people navigate and experience Canada’s biggest city.

The City of Toronto’s Tiny Town model was used as a planning tool in the early 1990s, but its novelty – and the advent of new planning technology – has since turned it into more of a tourist destination at City Hall. The model still has its uses, like pointing newcomers to the city’s oldest landmarks and areas of interest, but it only shows what was there thirty years ago.

“Right now, it’s missing some parts that are going to be developed in the future on the East side, near the Don Valley Parkway and East Harbour. There’s a large development going in there within the next ten to fifteen years,” said Harrison Thomas, a supervisor in the Graphics & Visualization section in the City Planning division.

The scale needed to change to represent a larger swath of Toronto, the physical model had to break apart so it could be transported to various offices and locations and the final product had to take into consideration new technology and accessibility.

The City of Toronto knew just the team for the job: Humber College student designers.

“The city recognizes that complex city challenges can benefit from engaging Toronto’s world-class colleges and universities on projects and initiatives like our CivicLabTO collaboration,” said Manjit Jheeta, the city’s director of strategic partnerships.

“Collaborating on Tiny Town is an amazing example of a multi-faceted, ongoing partnership between Humber College and the City of Toronto.” 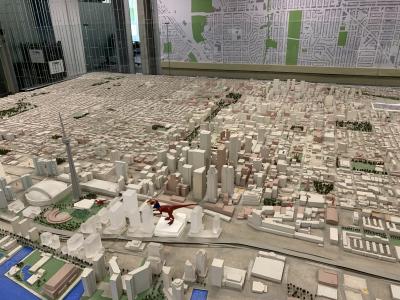 The paid internship opportunity was coordinated by the Centre for Creative Business Innovation, one of Humber’s Centres of Innovation (COIs), and the Faculty of Media & Creative Arts (FMCA) and included students from FMCA’s UX Design Ontario Graduate Certificate program and the Faculty of Applied Sciences & Technology (FAST) Bachelor of Industrial Design and Bachelor of Interior Design programs.

The project also involved collaboration between the CCBI and another Centre of Innovation, the Barrett Centre for Technology Innovation (Barrett CTI).

The COIs were developed to support interdisciplinary projects like the Tiny Town internship, with the aim of helping businesses and the community succeed and grow by examining challenging from many different angles and leveraging diverse backgrounds and expertise to disrupt traditional thinking.

Barrett CTI technologists and staff supported the production of the model prototype with the use of 3D printers and provided the space for the group’s presentation to faculty and city staff.
Before enrolling in Humber’s UX Design program, Victoria Yeboah worked in the construction industry and earned a degree in public policy, which made her a perfect fit for the Tiny Town project.

“I had a lot of context behind how the city works and what bureaucracy is like. I’m used to dealing with the development side of things,” she said.

“It’s amazing that Humber and the City of Toronto are asking students to do this. I don’t know where I would’ve gotten this experience otherwise.”

Yeboah’s biggest contribution was to the service design of the model, helping to shape how guests might experience Tiny Town and evaluating the process.

“The students’ expertise related to not just the physical design, but how people interacted with Tiny Town. That’s something we lost over time since the model was built. We’ve learned a lot about interactivity and how it can be experienced in a variety of ways by a variety of people,” said Thomas. 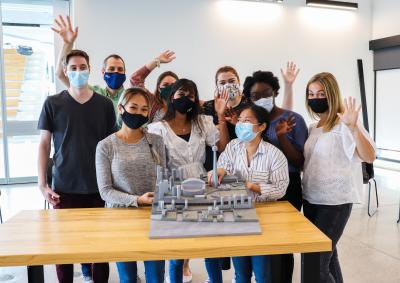 The students produced a small sample prototype of the physical model. Responding to the city’s parameters, their model was produced at a 1:1500 scale, making the CN Tower about 36 cm tall. Their final presentation showcased a sample tile.

The team also incorporated augmented reality (AR) technology. AR is similar to virtual reality, except the user is interacting with the built world while receiving enhanced perceptual information through a digital interface, like a smartphone.

Eventually, someone using a Tiny Town app could be able to point their phone at the Rogers Centre (formerly the SkyDome) and see where to buy tickets, how to get there by transit, and who owns the airspace above it. If the Raptors win a game, the Rogers Centre might appear to turn purple through the camera lens.

The original Tiny Town is a solely physical entity, but the students’ reimagined version includes a physical model and a digital twin that allows visitors to interact with it, which will set the end product apart from other miniature models of Toronto.

“Tiny Town is an industrial design artifact, but it also exists in an interior space and is an experience, which is the domain of UX Design. It’s an interdisciplinary project, and in the design world, there are no silos,” said Eric Forest, the project facilitator and FMCA faculty member.

“The students were brilliant and delivered something that the client could observe, comprehend the motivations behind and give us feedback on.” 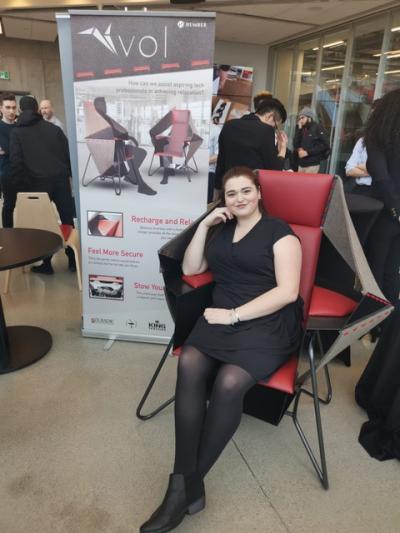 Like Yeboah, the rest of the Tiny Town interns were encouraged to use their unique skills and perspectives to enhance the prototype.

“I’m very interested in designing accessible products. Eric started off telling us he wanted to include accessibility and I spoke to him about my interests and ideas. He said, ‘Let’s do it!” said Kendra Savard, a fourth-year student in the Industrial Design degree program.

She made sure that the proposed Tiny Town model was wheelchair and cane accessible and changed details like the original model’s glass enclosure. The feature was removed so that people with hearing impairments could look across the model and lip read or use sign language.

“We’ve only touched the tip of the iceberg,” said Savard.

Fortunately, the city’s vision is to build on the successes and learnings from the internship and partner with Humber to further develop the project.

The Tiny Town Internship was one of five multi-disciplinary student projects managed by the CCBI this summer. The CCBI and Humber Galleries have plans to showcase the outcomes of each project this fall.  The interns' work also builds on the earlier work by students from various programs, including Multimedia Design and Development.