There are many moments from what proved to be a memorable and successful 2021-2022 season for Humber Athletics that are indelibly etched in the mind of Athletic Director Ray Chateau.

Perhaps the most special was watching the Humber Hawks men’s basketball team win the Canadian Collegiate Athletic Association (CCAA) championship on home court in front of a sold-out crowd. Chateau said Humber became just the third college in more than four decades to accomplish that feat after previously doing so back in 2001.

In total, Humber captured five CCAA national championships – men’s basketball along with men’s soccer, women’s golf, and mixed and women’s doubles badminton. As well, Humber won 11 Ontario Colleges Athletic Association (OCAA) provincial titles this season – including the rare accomplishment of winning both the men’s and women’s basketball and volleyball championships within hours of each other on the same night in March.

Chateau has been named the co-recipient of the 2021-2022 CCAA Athletic Director of the Year Award, becoming the second Humber athletic director to earn the honour since Doug Fox won it back in 2002. The award recognizes administrative excellence within the campus or college community environment and goes to an athletic director who has made a significant contribution to their institution over the past academic year.

“It’s rewarding but it’s also reflective of the whole department, including our staff and coaches,” said Chateau. “We have an exceptional team and I work with some great people. This award is a recognition of the entire group.” 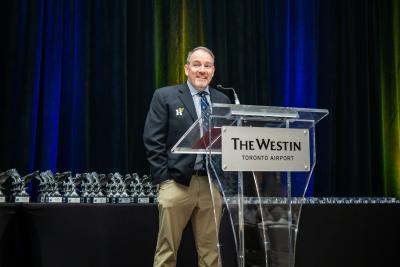 The achievements on the court or field by the athletes were remarkable and Chateau played an instrumental role in ensuring the 2021-2022 season was able to go ahead.

Chateau and his team oversaw a return to play for the college’s student athletes and coordinated the return of fans to Humber’s sporting events while dealing with COVID-19 protocols. When the 2020-2021 season was cancelled due to the pandemic, he helped Humber’s High Performance Centre transition to an online format so the student athletes could continue to train.

With provincial restrictions prohibiting in-person practices and training at the time, there was a possibility the 2021-2022 season would have been cancelled but Chateau and the OCAA’s Senior Leadership Council brought stakeholders together to come up with a roadmap to ensure the season went ahead.

“My number one commitment to our student athletes was that we wanted them to have as normal a year as possible,” said Chateau.

"I want to congratulate Ray on this incredible and well-deserved achievement," said Humber’s Associate Vice-President, Learner and Career Success and Dean of Students, Ian Crookshank. "He is a leader who strives each day to actively live his values of integrity, excellence, and inclusion, which is evident in how he leads and gives back at the local, provincial, and national levels.”

Chateau also brought forward concerns to the CCAA on behalf of Humber that were raised by a student athlete. The concerns were about the CCAA’s operating code regarding transgender student athletes and participation in varsity sports.

A special meeting of the CCAA was held in January and language in the code was revised to allow student athletes to compete on the sports team that corresponds with either their sex assigned at birth or their gender identity.