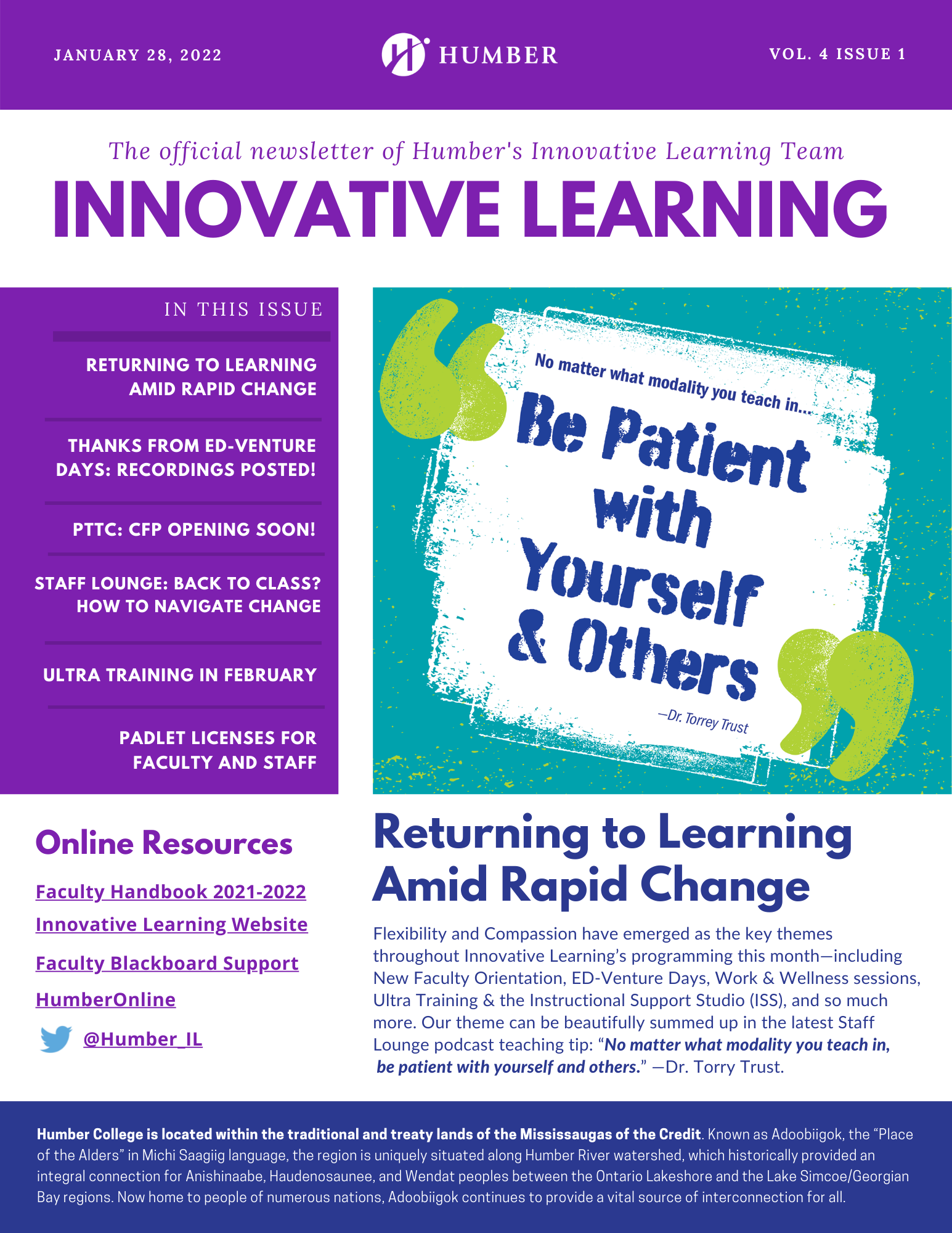 We hope you enjoy this issue and find the resources inspiring and useful. 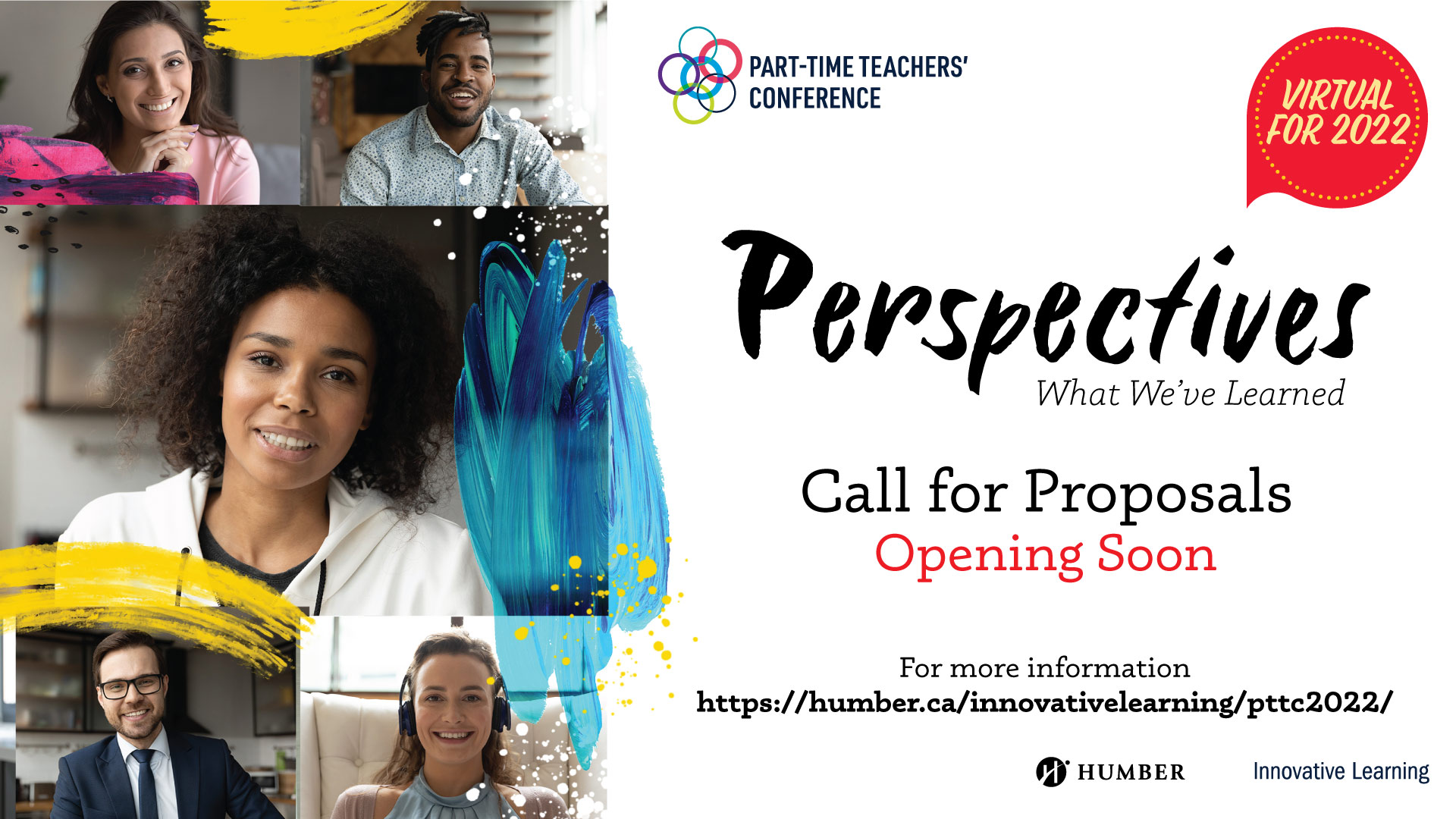 The call for proposals is opening soon!

Find more information at the PTTC Conference Page on the Innovative Learning website. 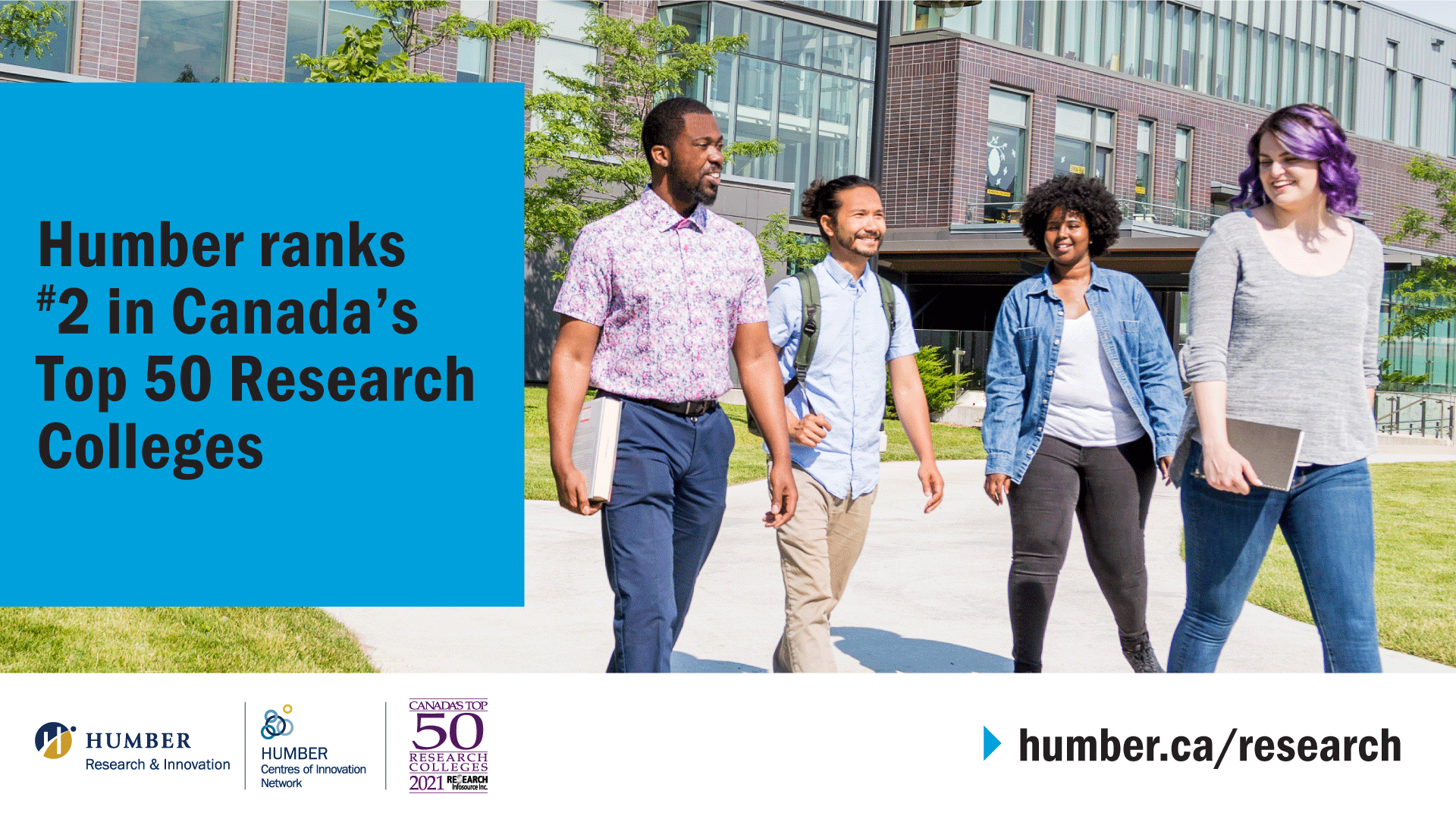 Humber College is the second top research college in the country, according to rankings released today by Research InfoSource Inc. 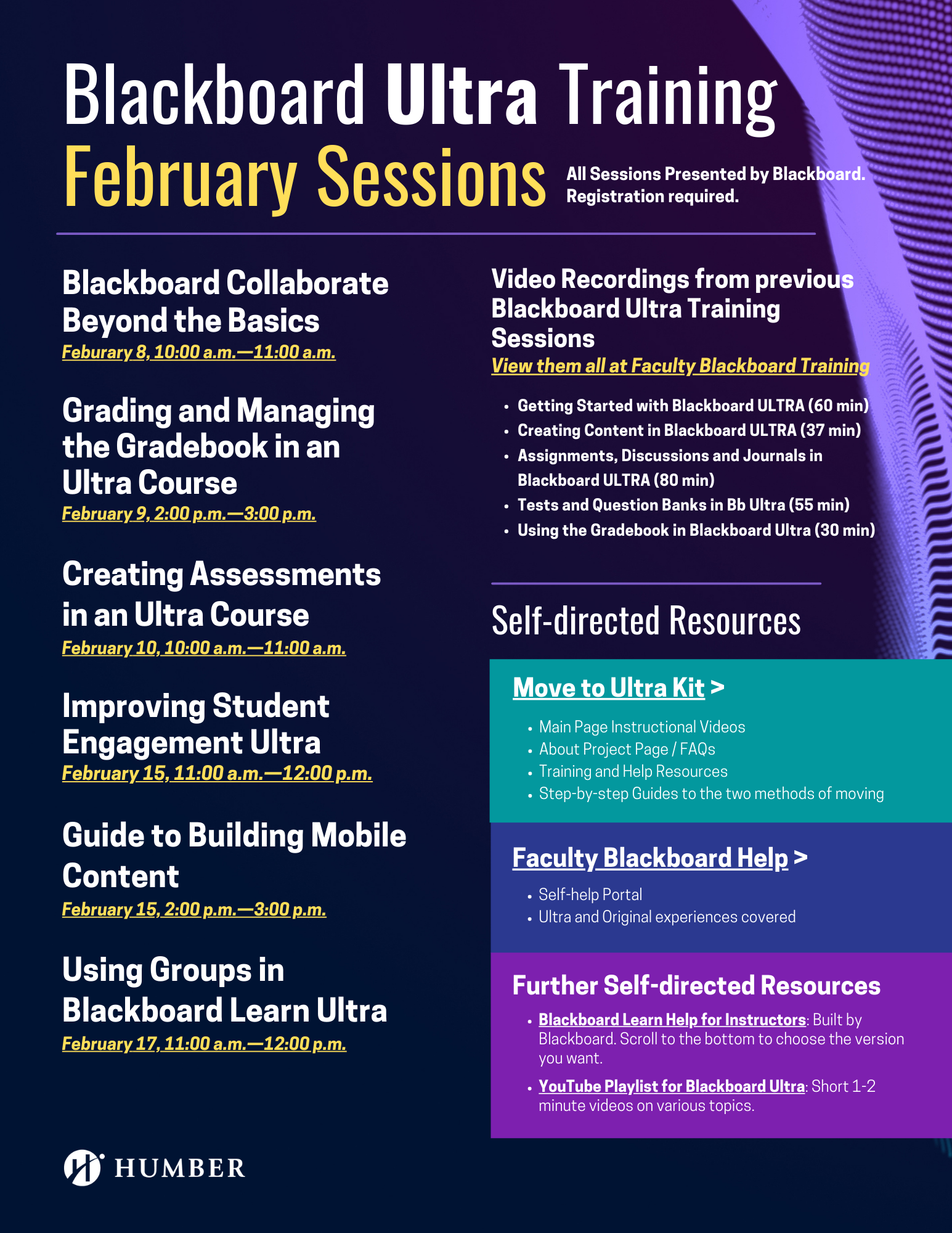 View them all at Faculty Blackboard Training 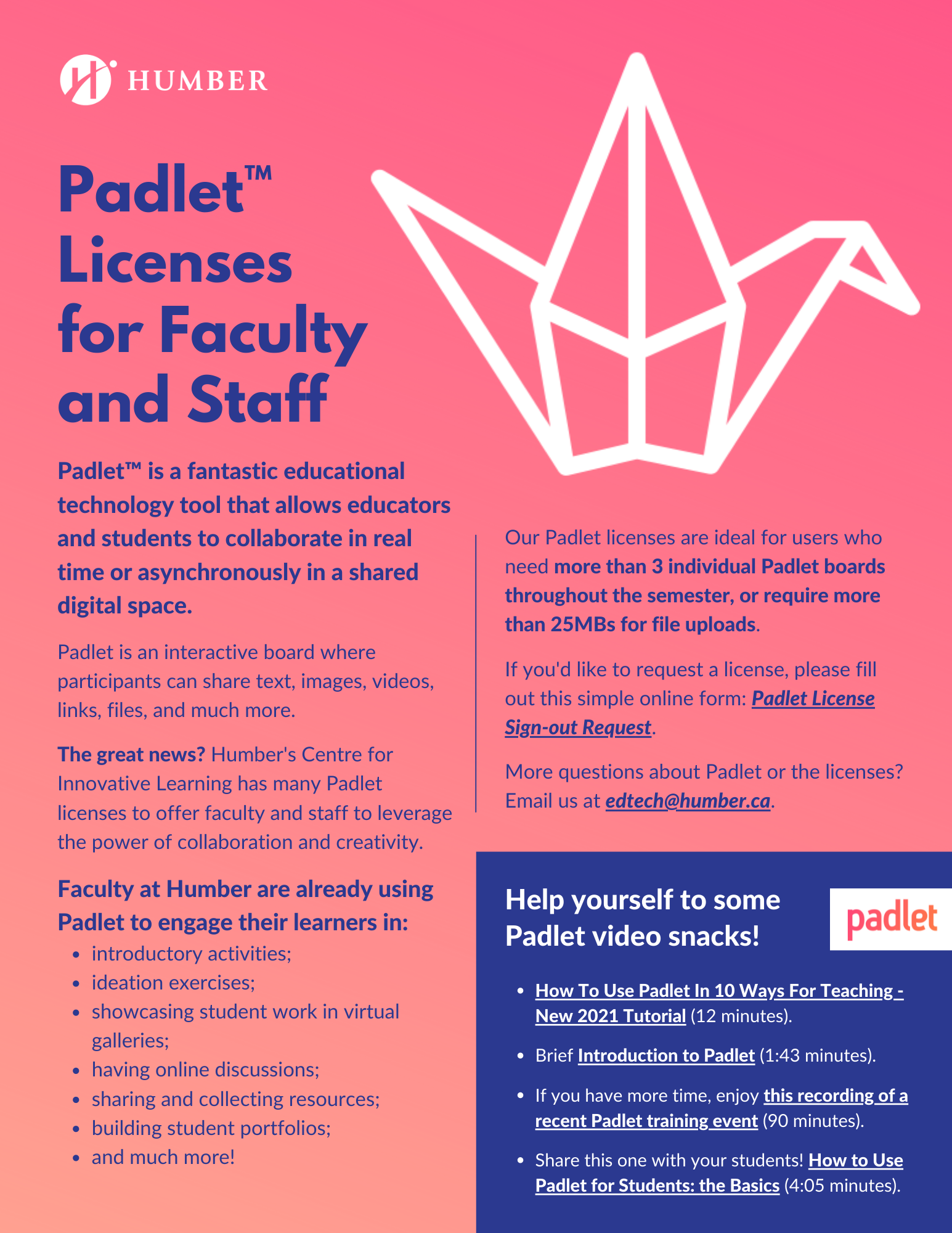 Padlet™ is a fantastic educational technology tool that allows educators and students to collaborate in real time or asynchronously in a shared digital space.

Padlet is an interactive board where participants can share text, images, videos, links, files, and much more. The great news? Humber's Centre for Innovative Learning has many Padlet licenses to offer faculty and staff to leverage the power of collaboration and creativity.

Faculty at Humber are already using Padlet to engage their learners:

Our Padlet licenses are ideal for users who need more than 3 individual Padlet boards throughout the semester, or require more than 25MBs for file uploads.

If you'd like to request a license, please fill out this simple online form: Padlet License Sign-out Request
More questions about Padlet or the licenses? Email us at edtech@humber.ca.

Help yourself to some Padlet video snacks!

New Vice-Provost, Associate Vice-Provost Named at the University of Guelph-Humber
When:
January 27, 2022 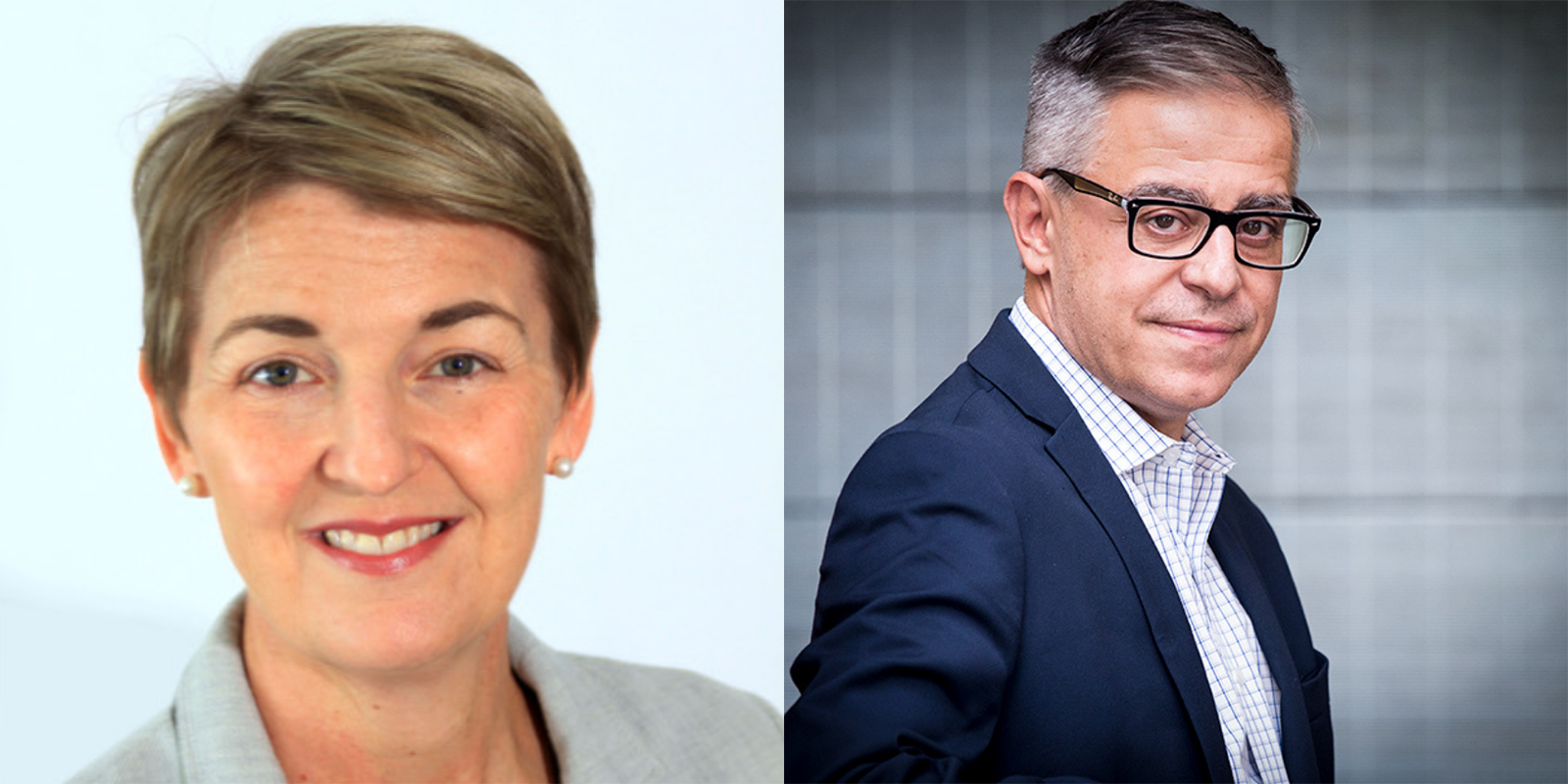 Dr. Melanie Spence-Ariemma has been named the new vice-provost and chief academic officer at the University of Guelph-Humber. Her appointment begins May 2.

It was also announced that Dr. George Bragues, University of Guelph-Humber assistant vice-provost and head of the business program, has been appointed associate vice-provost (academic).

Dr. Spence-Ariemma is currently dean of student affairs at the Michener Institute of Education at the University Health Network in Toronto. She previously served as provost and vice-president (academic) at Sheridan College.

She has extensive experience as a senior academic leader in Ontario’s post-secondary sector with demonstrated commitment to inclusion, equity and excellence in teaching, learning and student services.

“Dr. Spence-Ariemma is a strategic leader and team builder who has successfully led planning and implementation of a wide variety of academic and operational projects,” Chapman said.

She has led and collaborated on pan-institutional and interdisciplinary initiatives and managed progressively large and complex projects with multiple stakeholders, including program moves and IT systems projects.

She has been a professor in the medical radiation sciences program within the Mohawk-McMaster Medical Radiation Sciences Program, and an adjunct professor at Central Michigan University, Niagara College, in New York and at Laurentian University. She was also an instructor in the University of Toronto’s Department of Radiation Oncology.

“As Guelph-Humber embarks on a vision of renewal and revitalization, I am confident we will continue to lead through creativity, curiosity, and innovation and be a place where we empower students to become lifelong learners and leaders, who will shape the future of our communities, industries, and education.”

At UofGH, Dr. Spence-Ariemma will oversee academic and administrative endeavours.

Classes began in fall 2002, taught by faculty from both institutions. In 2004, the University of Guelph-Humber occupied a state-of-the-art building on the Humber campus. Conversations are currently underway with the City of Brampton about a possible move of UofGH to Brampton in 2026.

In making today’s announcement, Chapman thanked Bragues for serving as interim vice-provost for the past 18 months. He will continue in the role until May 2.

“Dr. Bragues has provided stability during a tumultuous time during the pandemic and has also played an invaluable role in working with Guelph, Humber and UofGH as we have been exploring the possibility of a move to Brampton,” Chapman said.

“He has been a critical part of the University of Guelph-Humber leadership team for many years, and I am delighted that he will continue to be part of that team in his new role as associate vice-provost (academic).”

A search will occur in the coming months for a new head of the University of Guelph-Humber’s business program.

Chapman also thanked members of the search committee, which included faculty, students and staff members, for their hard work and commitment. 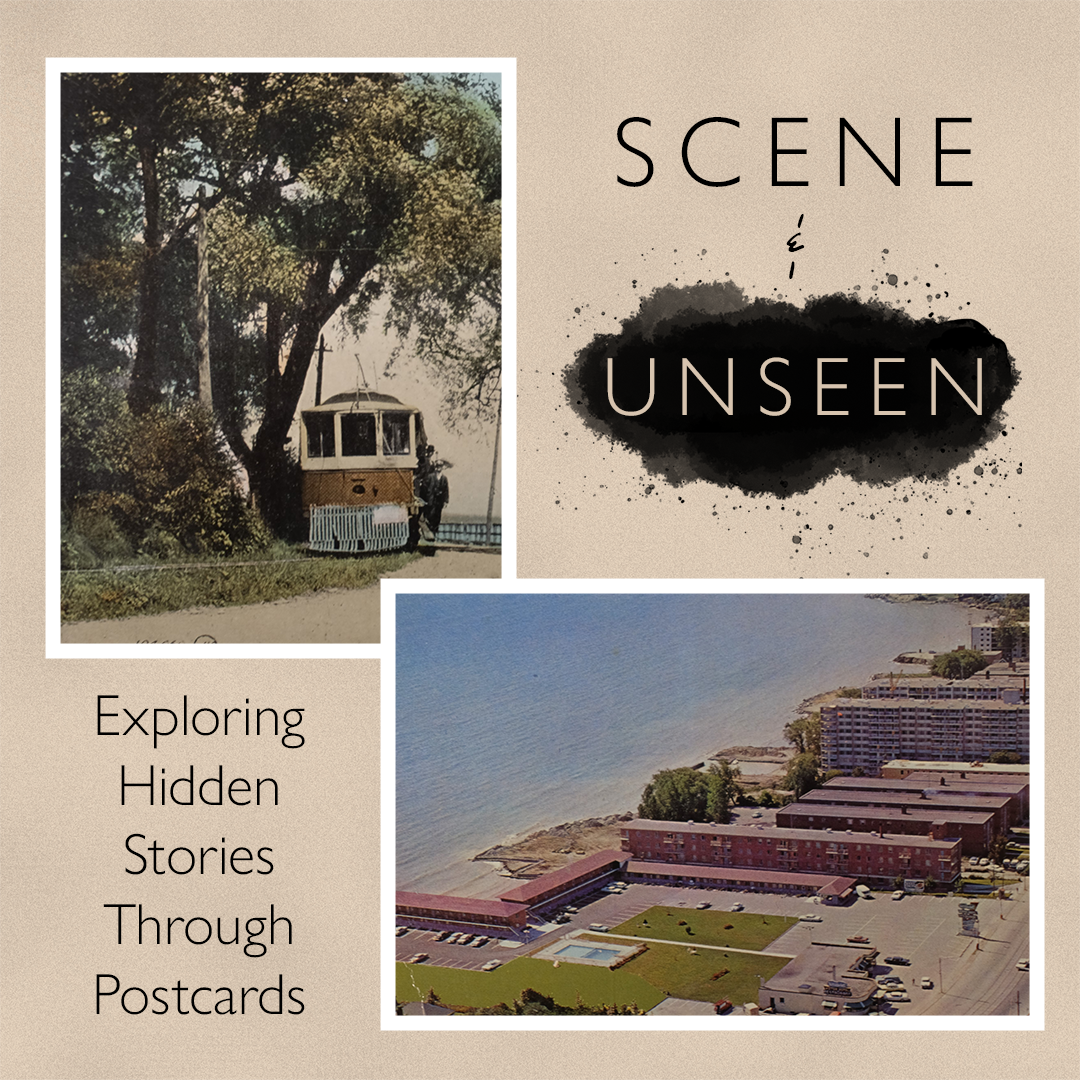 In celebration of the Lakeshore Grounds Interpretive Centre’s five-year anniversary, our new online exhibition featuring postcards from our collection launched on January 26, 2022.

Why postcards? This nostalgic method of short-form communication rose in popularity in the early twentieth century due to the increased speed and affordability of the postal service. But for most of their history, postcards have served as more than just a way to share a word with a loved one. Postcards also act as a marker in time, representing a specific location and the memories that a collector may have.

Join us at Scene and Unseen to dive deeper into the stories of South Etobicoke.

On Monday, January 31, Humber will launch the Ontario Colleges Student Experience Survey (OCSES) to all students in full-time, funded programming enrolled in semesters 2 to 8. This survey will assess students’ experiences related to teaching and learning quality, program related knowledge and skills, work integrated learning (if applicable), and student services and resources. The results of the survey will allow the college to identify strengths and areas of improvement.

Students will receive an email invitation titled ‘Important: Your response needed to Humber’s Student Experience Survey’. To promote the survey, participants will have the option to enter a draw for a chance to win one of ten $100 e-gift cards of their choice.

For questions about the survey, please contact Jean O’Donnell at jean.o’donnell@humber.ca.

Student’s questions about the survey can be directed to iresearch@humber.ca. 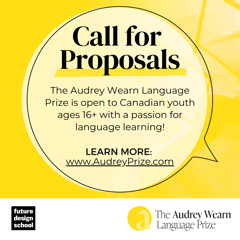 Are you passionate about languages? Do you believe in the power of true, meaningful communication to inspire change? Would $10,000 help your ideas come to life?

Collectively, we are in the midst of a communication crisis and Future Design School wants YOUR help to solve it.

Future Design School is looking for passionate Canadian youth (aged 16+) who want to solve a language-based challenge in their community. This could be anything - from arranging community learning events to prevent the loss of traditional languages, to creating an afterschool program assisting busy working parents helping their children learn to read - the sky's the limit!

The winner of the Audrey Wearn Language Prize will receive up to $10,000 and the ongoing support of Future Design School to make their project come to life.

Humber Galleries is excited to launch a new student art call in partnership with Siemens Canada!

We're asking students to create artworks that speak to the theme of Technology with Purpose and what it means to them. How can technology shape our collective future? What role does technology play in the transformation of our society and economy? How can we solve tomorrow’s challenges by using technology?

Running from today until early March, this call is open to all current Humber College and University of Guelph-Humber students to create brand new artworks in any physical medium. Whether it be a painting, a photograph, an illustration, any genre or medium that can be printed and/or installed in a frame is welcomed.

Students have a chance to win $1,500 and have their artwork become part of the Siemens Canada Art Collection. Applications are now open until Wednesday, March 2. Visit humbergalleries.ca/2022-siemens-art-call for more submission info and to apply today.

Have some questions or want to get some more info? Stay tuned for details on our live info session coming up Wednesday, February 9th.